Why this college freshmen accounting of American Laurates? After Singer in 1978, American authors fell into disfavor with the Nobel Committee. It is worth noting some of the American authors who left us before receiving the prize: Carl Sandburg, James Baldwin, Langston Hughes, Zora Neal Hurston, Ralph Ellison, Robert Penn Warren, Theodore Dreiser, Kurt Vonnegut, Carson McCullers, Tennessee Williams, Willa Cather, Flannery O'Connor, John Updike, Bernard Malamud, Mark Twain, and these are just a few. Those still living to be considered include: Joyce Carol Oates, Thomas Pynchon, Don DeLillo; Philip Roth, Richard Ford, Cormac McCarthy, and Joan Didion. The last award was 23 years ago. Why the drought?

Why ask why? It's a big world and there are many more writers. But just doing the math, and broken down beyond political correctness, Dylan is the first American in 23 years, the first American man in 29 years, and the first native-born American Man in 40 years (Singer and Brodsky were emigres, who made America an infinitely better place to live) to become a Literature Laurate. Dylan distinguished himself as the voice of a generation (The Times They are a-Changing (1963), the angry young man turning his back on the Folk Movement (Highway 61 Revisted (1965), The Tennessee Cat (Nashville Skyline (1969), leader of the greatest Band in the world (Self Portrait (1970) through The Basement Tapes (1975) and the spiteful, raging genius (Blood on the Tracks (1975). Dylan had his late causes: Rubin "Hurricane" Carter (Desire (1976), Jesus Christ (Slow Trane Coming (1979) through Shot of Love (1981), his brilliant defense of Americana trilogy (Time Out of Mind (1997), Love and Theft (2001), and Modern Times (2006) and the Great American Song book as you have never heard it (Shadows in the Night (2015).

The Nobel Prize for Literature is awarded, for necessarily, ..."outstanding contributions in the field of literature." Where else would Dylan be found? The Nobel Committee expanded their view in an inspired fashion, recognizing Dylan, "for having created new poetic expressions within the great American song tradition." That he did. 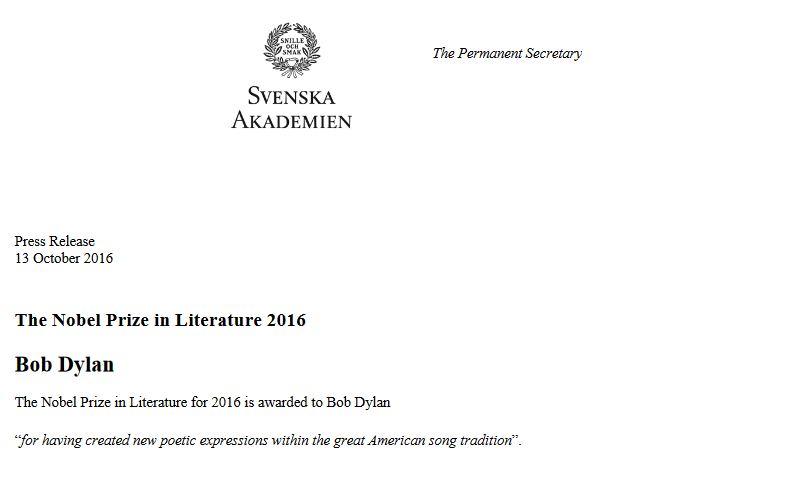 The Swedish Academy has not been above doing the controversial and occasionally sticking its finger in the eye of an antagonist. In 1970, Soviet dissident writer Aleksandr Solzhenitsyn, was the Literature Laurate. He was recognized for a body of work critical of the Soviet Monolith at the height of the Cold War and was unable to accept the prize until after his deportation in 1974. Argentinian writer Jorge Luis Borges was nominated for the Prize several times but was never awarded as the Academy frowned on his support of certain Argentine and Chilean right-wing military dictators, including Augusto Pinochet. Maybe it is a reach, but in 2016, America finds herself in uncharted political, cultural, and social waters, badly in need of a moral weather vane. The selection of Dylan is an international nod, recognizing the continuing growing pains of a youthful democracy that remains in search of itself.