Wonderland Park: Just Get In

BY GLENN ASTARITA
October 22, 2016
Sign in to view read count 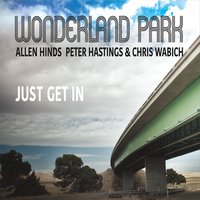 I recently reviewed L.A. based guitarist Allen Hinds' excellent Fly South for AllAboutJazz.com, and his concurrent release —a trio outing with the band Wonderland Park, Just Get In —provides a contrasting glimpse of the his robust artistic powers.

Fans of Jeff Beck, Jimmy Herring and other guitar luminaries should check out Hinds who has made a name for himself as a top-flight session ace, educator, and staff member at the regional Musician's Institute. Hinds coalesces legato phrasings, heartwarming extended notes and bristling flurries with seamless fusions of Americana, jazz rock, fusion and modern jazz, ala Wes Montgomery and beyond. At times, he signals the glory days of classic-rock via his wailing opuses and foot- stomping crunch chords but on "Just Get In," he executes an ominous mid-tempo rock groove with twirling notes and gradual buildups while eventually zooming in for the kill. On the energized "Barrons Crossing" and the blues track "A Far Cry," Hinds integrates a Hammond organ patch or sample into the mix to great effect. Regardless, he's a storyteller while delving into some interesting and delightful harmonic terrain with bassist Peter Hastings on "Truth Be Told." Here, the guitarist raises the pitch during the bridge, complemented by fluid reverse-engineering processes and jazzy licks, topped off with a radiant sheen and shifting tonal paradigms.

Duly noted on Fly South, the leader is a strong composer who incorporates tuneful themes into his repertoire. Hence, this album is by no means your plain old, slam-dunk guitar hero exposition framed on endless soloing tirades. On the contrary, it's music with a meaning as his technical gifts and cunning musical vision yield a sense of enchantment regardless of volume or tempo.

All Due Respect; Just Get In; Bobby’s Big Wheel; Barron’s Crossing; Truth Be Told; Spittin’ Image; A Far Cry.

Title: Just Get In | Year Released: 2016 | Record Label: Self Produced