BY LARRY TAYLOR
December 25, 2011
Sign in to view read count 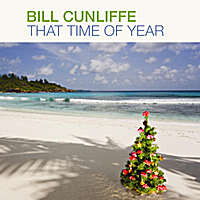 Pianist Bill Cunliffe harkens back to his youth in That Time of Year, recording solos on Christmas songs that he says he fondly remembers. This talented, versatile performer is also an esteemed composer-arranger, having been nominated for Grammy awards three times, winning in 2010 for Best Instrumental Arrangement. A Southern Californian, he currently teaches at California State University, Fullerton, playing local gigs and recording extensively.

The 14 songs range from the pious simplicity of "Angels from the Realms of Glory" and "Silent Night" and a partying, funky version of "God Rest Ye Merry, Gentlemen," to his nostalgic, reflective take on "'Tis the Season."

Cunliffe's talent as an improvisor is apparent "We Three Kings," painting an impressionistic picture, while "O Christmas Tree" contrasts in its bold stride style. Recent Christmas records seem to avoid the cheerful caroler version of "Jingle Bells," but Cunliffe's version remains buoyant and decidedly hip. Here the sleigh starts slowly out the gate, only gradually picking up speed into a swinging gallop. "O Christmas Tree" also begins tentatively, but then adjusts to light lilting.

Along with his other activities, Cunliffe is currently composer-in-residence at Pasadena, California's All Saints Episcopal Church. From this background, he brings the seldom heard 16th Century "Coventry Carol," delivering a sensitive meditation on the religious meaning of the holiday, a five-minute-plus example of solo piano artistry. On the final selection, vocalist Denise Donatelli contributes a tender "I'll Be Home for Christmas," the popular favorite going back to World War II.

A frequent comment regarding a jazz Christmas album is to forget about the holiday and appreciate it for just being a good jazz album. That Time of Year proves that cliché.