Soul-funk was king in 1970 and Thad Jones was obviously in its thrall. 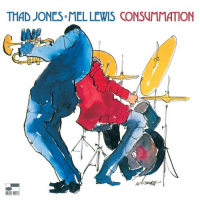 Blue Note was never home to many big bands, but the Thad Jones-Mel Lewis Orchestra recorded four albums for the label from 1967-70, and one is a certified classic.

Consummation is the musical equivalent of Neapolitan ice cream—three flavors packed into one large container. The album contains three moods: soft and contemplative, sprightly and upbeat, and soulful and funky. Each gets two or three songs, and together they make a tasty treat.

The record begins with a fake-out. "Dedication" starts like an outtake from Miles Davis' Sketches of Spain, all solemn and muted and gentle. Halfway through, the band bursts out into an exuberant spree and stays there for the next two songs, "It Only Happens Every Time" and "Tiptoe." This is big band jazz the way you imagine it, with exciting unison passages and room for virtuoso solos by top-flight musicians.

And then the mood changes. "A Child is Born" is the debut of the Thad Jones classic. Contrary to the title—hey, a child is born!—the mood is quiet and lush, rather than celebratory. The gentle theme is played over and over—first by Roland Hanna's piano, then by Jones' flugelhorn, then by the whole band, and finally by just the flute. It is one of the sweetest pieces ever recorded.

And then—change moods again. "Us" and "Ahunk Ahunk" are soul-funk workouts that include an electric piano and electric guitar—quite unlike anything you'd imagine a big band playing. But then, soul-funk was king in 1970, and Thad Jones was obviously in its thrall. If you're a fan of the genre—and I am—"Ahunk Ahunk" is the album's highlight.

The record ends with two last pieces. First, there's a hard-driving bop number, a Jones original called "Fingers" that sound like it could come from the Dizzy Gillespie-Charlie Parker canon. And finally, there's the title song, another dreamy ballad featuring Jones' horn. And so Consummation finishes as it began, with a tune to stir the emotions and remind us that Thad Jones and Mel Lewis were big band leaders whose band and tunes were anything but traditional.