By GLENN ASTARITA
December 20, 2020
Sign in to view read count 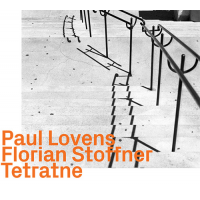 German drummer Paul Lovens' distinguished career within European free jazz / improvising circles is well-documented. Generally speaking, he's performed with a who's who of futurists and others who tend to stretch the limits of standard musical regimens. On this outing he partners with Swiss experimental guitarist Florian Stoffner for an interconnection of spurious ideas in front of an audience in Ljubljana at the 2019 "Sound Disobedience Festival."

Thanks to a crystalline soundstage the slightest details are heard amid the interwoven dialogues, complete with bizarre treatments and free form micro- themes. With the guitarist's odd tunings, noise effects and the drummer's booming bass drum hits, deft cymbals work and offbeat digressions, the duo works as a team via evolutionary processes and non-linear motifs, where time is divided into segments. Moreover, Lovens often takes on the role of traffic director, complemented by a radiantly shaded alien dichotomy.