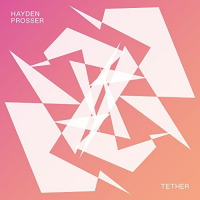 Born in Somerset, England in 1990 and now based in Berlin, Hayden Prosser studied jazz at Middlesex University before leaving England and teaming-up with New York pianist Elias Stemeseder along with tenor saxophonist Philipp Gropper and drummer Max Santner.

"Undo" is characterised by an unrelenting astringency, the melodic element consolidating towards the end of this eight minute lugubrious outing dominated by tenor saxophone and piano. "Glas" at just one minute's duration is effectively a link track populated by piano and bass, whereas "All" is dominated at the outset by Hayden Prosser's electronic inventions which subside early on allowing a less unconventional quartet sound to emerge but not without recourse to further electronica. But it's Elias Stemeseder's exploratory piano which dominates initially before a resounding vamp between tenor and piano draws the piece to a close.

The short "Before Now" also involves audible, somewhat disconcerting electronics, one of the three tracks augmented by this medium, although "Undo" also credited with electronics, is not so noticeably imbued with this embellishment. "Season" introduces a step change. The quartet's hitherto fragmented approach seems to evaporate here, playing with much more rhythmic cohesion. The spacey opening to "Out Of This" cedes to deep arco bass and resonant piano resolving in a delicate pastoral exposition whilst "Remainder," another short piece, takes a more improvisational approach before seguing into the slow "Overturn" which at its outset establishes a melody between piano and tenor, fractured and abstract, it concludes with a strong closing ensemble vamp.

"Small Chance," another short track of just over one minute in length, leads into "Rounds" which, with a piercing whistling sound, at first sounds like electronics, but this is a transient feature as the natural sound of the acoustic quartet reappears and this is followed by the outro, an ultra-short reprise of "All." Prosser's compositions are predominantly cerebral in nature and presented as a suite of soundscapes for which Stemeseder's imaginative and intuitive involvement is absolutely critical. This is not necessarily "easy" listening, but whoever said music should be facile to warrant justifiable admiration? Tether will surely reward repeated plays, from which the listener will undoubtedly glean new textures and colours.

Undo; Glas; All; Before Now; Season; Out of This; Remainder; Overturn; Small Chance; Rounds; All (Reprise).