BY MARCIA HILLMAN
August 16, 2006
Sign in to view read count 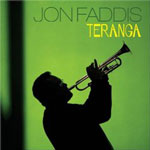 "Teranga" is the word for hospitality in the Wolof language of Senegal, and on his release of the same name, Jon Faddis invites you into his musical world. Faddis (trumpet and flugelhorn) is joined by pianist David Hazeltine, bassist Kiyoshi Kitagawa and drummer Dion Parson, as well as several guests: Alioune Faye (sabor), Abdou Mboup (djembe and talking drum), Russell Malone (guitar), Gary Smulyan (baritone saxophone), Frank Wess (alto flute) and Clark Terry (flugelhorn and vocals). All but one of the compositions are originals by Faddis.

The concept of family runs throughout this offering, begining with the opening "The Hunters & Gatherers, which features solos against a commanding rhythmic pattern. "Waltz For My Fathers and Brothers honors Faddis' musical family (including his real father, Woody, and his musical father, Dizzy Gillespie) and is dedicated to Michael Brecker and his struggle with MDS. Faddis takes solos that are conversational in nature on this pretty ballad.

The title track matches his joy and passion against African-inspired percussion and contains a haunting flute solo by Frank Wess. "Hey, Lalo! is a sassy piece written for the composer/arranger Lalo Schifrin. "The Fibble-Ow Blues pairs Faddis with the legendary Clark Terry for some improvisational interplay, as well as a vocal drawing from Terry's inimitable made-up language skills. On the softer side, "Laurelyn finds him with Russell Malone, showing off the duo's sensitivity. He accomplishes another gentle reading with "The Courtship, a composition by Benny Carter. The closing "The Baron is an up-tempo roof-raiser featuring a swinging solo by Gary Smulyan.

Jon Faddis, a musician with many musical sides, offers his hospitality on Teranga. Take him up on it.

The Hunters & Gatherers; Hey, Lalo!; Waltz For My Fathers and Brothers; Teranga; The Courtship; The Fibble-Ow Blues; Laurelyn; Transitions; The Baron.