BY MICHAEL STEINMAN
April 10, 2010
Sign in to view read count 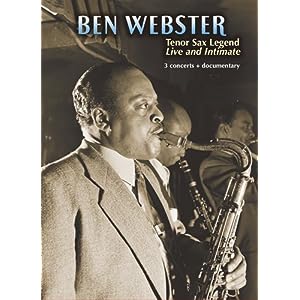 Although he looked like a frog or a bullmastiff (hence his nicknames Frog and The Brute), saxophonist Ben Webster was splendidly photogenic, his emotions nakedly on his face. This DVD brings together three concert performances and one documentary from his last decade in Europe. He purrs, snarls and moans with a rhythm trio, a big band, a string section, in a casual club jam session, surrounded by congenial young players: violinist Finn Ziegler, bassist Niels-Henning Ørsted Pedersen, trumpeter Charlie Shavers and pianist Teddy Wilson. Even better, we see him at home, talking about his beginnings, his days with Fletcher Henderson and Duke Ellington. Here he shares hilarious anecdotes of errors made and joys remembered: how, for instance, Ellington tricked them into playing "Cotton Tail" as a run-through—Webster calls his famous solo "lackadaisical"—then capturing it as the master take, infuriating Webster.

Scattered through the DVD are priceless ballads, where deep feeling and a half-century of technical mastery come together in sound-paintings. Even when Webster's playing had slowed to a walk, his sonority was still intact, perhaps even more nobly formed than it had been. The delights of this DVD go beyond the sound. We see Webster as tenderly gruff and sometimes the reverse, his stiff-legged walk, his half-closed eyes watching everything. It would be a pleasure to view this DVD with the sound off and observe Webster fitting his mouth around the mouthpiece after each phrase, shaking his head, grimacing at the effort.

The final segment, especially, lets us pretend to eavesdrop—an irreplaceable pleasure, like being admitted into a great character actor's dressing room. We watch him listening to a tape of Art Tatum or attempt a half-chorus of his funny, lopsided rustic stride piano. The whole DVD is a tender portrait of an aging lion who had refined his art to near-perfection, essential viewing for those who want to see jazz up close—hard labor from the heart that rewards both hearers and players.

I write about the following styles:
Dixieland/New Orleans/Swing
Hot Jazz