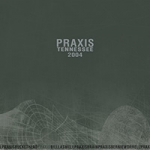 Praxis is the operative name of an experimental jazz/rock/funk/dub quartet led by bassist Bill Laswell with drummer Brain (Les Claypool's Primus), guitarist Buckethead and keyboardist Bernie Worrell (wizard of synthesized funk for P-Funk, Talking Head, etc...). They first came to Frankenstein-like life in 1993: because like that mad doctor, Laswell stitched Praxis together from disparate parts of the contemporary music corpse and then animated it into a sometimes powerful, and sometimes hideous, life-form.

In 2004, Praxis hit the stage around midnight on the first night of Bonnaroo, the jam-band scene's annual music festival in Manchester, Tennessee, and unleashed this machine-gun torrent of weird, wired and angry sound. Keyboards and guitar combine to sound like hip-hop turntables scratching heavy metal in the opening "Vertebrae. "Spun tears through more of the same, and then congeals into the raging, barbed electric blues of "Night of the Slunk where Buckethead plays so many hot and fast notes, the music seems to blur as it whizzes past.

The high point of this set is Buckethead's solo on "Guitar Virus introduces a torrid run through one of Jimi Hendrix' most memorable funk-rock melodies—"Machine Gun. Worrell and Buckethead double up and echo each other's screeds while Laswell and Brain churn up the underbody, deep, black and nasty. "Bent Light resurrects post-punk minimalism, repeating a small guitar phrase with slight variations to build the melody and melodic tension, nearly a nod to the "Robert Fripp school of intricate progressive guitar rock.

More open and airy, "Optic creates more of a mood than music, a heady "Pink Floyd atmosphere that will most likely conjure up (to those familiar with it) echoes of Laswell's dub project, Panthalassa (Columbia, 1998) with its manipulated Miles Davis recordings. "Magus brings down the curtain with a wildly progressive jam in some spacey, impossible-sounding time, electrified by Laswell's raging "jazz-rock bass, if by "rock you mean "Motorhead and "jazz you mean "Jamaaladeen Tacuma.

Praxis got over. Jambase magazine simply said of their set: "This is the glory of Bonnaroo.