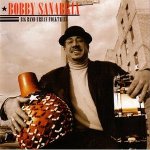 In the wake of the disappearance of many of the Afro-Cubanjazz big bands of the late twentieth century like Dizzy Gillespie, Mongo Santamaria, Chico O'Farrill, Tito Puente and Mario Bauza, drummer/percussionist Bobby Sanabria heads up a twenty-piece band that fills that gap quite nicely.

A native New Yorker, Sanabria graduated from the Berklee College of Music in 1979 and worked with many members of the aforementioned orchestras. Big Band Urban Folktales is appropriately titled. Sanabria tries to corral, and at least partially succeeds in grasping the various forms of Latin music, that include mambo, merengue, samba, salsa, and rhumba which exist in today's environment. Several of the members of the band, including trumpeter Michael Phillip Mossman, reedmen David Bixler and Peter Brainin and trombonist Chris Washburne have been performing in this genre for years and have recordings under their own names.

The album opens with Mossman's "57th St.Mambo," offering up a hot trumpet solo from the composer that is neatly matched against a Sanabria drum solo. Washburne's "Pink," a combination of cha-cha rhythm and New York funk, features a growling solo from the trombonist. Towards the end of the tune, the heat of the moment catches the band members, urging the soloists on with the same vocal technique used a few years ago in Jennifer Lopez' pop hit "Let's Get Loud" which, on this album, succeeds in enveloping the listener.

Another unusual technique is used in the ending of "El Ache de Sanabria En Moderacion. When the tempo changes, Sanabria leads the charge with his furious work of conga drum with stick, ceremonial drum and marimba. This is augmented by other percussionists, creating an urgent sense of excitement.

Sanabria brings far more than a Caribbean sense of Latin music into play by featuring the music of Brazil on Hermeto Pascoal's "O Som Do Sol," as well as the excitement of "The Grand Wazoo" from the songbook of Frank Zappa. There are also two vocal offerings featured. The Buddy Johnson favorite, "Since I Fell For You," is sung by Charnee Wade in a typical blues fashion. The tune begins as a bolero but soon morphs into straight-ahead swing, and then Latin dance again. The sturdy standard "Besame Mucho" is also included, with a vocal by the veteran 76 year-old Hiram "El Pavo" Remon, and is abetted by a nicely placed soprano sax solo by Peter Brainin. On the somewhat shorter "Blues for Booty Shakers," Sanbria gets a good opportunity to show off his chops on vibes.

This album presents an amazing amount of music to absorb for both dancers as well as Latin music couch potatoes.