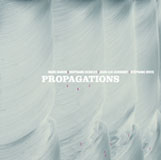 Just when it seemed that the saxophone quartet might be a format that had run out of ideas or momentum, along come this French foursome to add new vitality to the genre. For reasons that are not entirely clear, even when they have included otherwise free, radical players (I'm thinking of Julius Hemphill, David Murray, Lol Coxhill, Paul Dunmall) saxophone quartets have too often opted to play it safe; a sweeping generalization, perhaps, but one often borne out.

Now, this combination of tenor, two altos and soprano (together for three years, although this is their recording debut) takes a truly radical approach, an approach more compatible with improv methodology than with that of a big-band horn section or a four-part vocal harmony group. So, there are no ensemble riffs, no interweaving melody lines, and no call-and-response—in fact, none of the standard sax quartet vocabulary. And—just as refreshingly—they aren't called The (Blah-Blah) Saxophone Quartet either; they are just identified by their names.

Instead, across three tracks varying in length from ten to just over seventeen minutes (a total time of forty-one minutes), the saxophones predominantly play long-sustained notes or make subtle noises with the instruments' pads without blowing. The combined effect often sounds more like a combination of resonating electronics and percussion than four saxophones.

The final track starts out with the players in a rather more garrulous mood, but not until late in the piece do they remotely approach familiar sax quartet territory, when all four blow together, producing a righteous blast of sound. But it is short lived, followed by a period of guilty silence, as if they have to atone for the outburst. These four almost willfully seem to be avoiding well-trodden pathways, thumbing their noses at them and, hence, at cliches of the genre. Admirable.