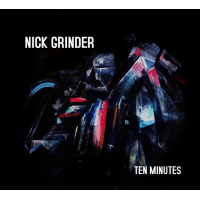 It's a shame that more trombonists don't make records like the one 25-year-old Nick Grinder has. The instrument has long since proven its worth in bebop, post-bop and neo- bop, but few bone players have elected to exploit the instrument's unique timbre and music- making structure, not to mention writing music most conducive for it, in the way that Grinder and his band have in their debut. In a strong first recording that lays out eight original compositions, Grinder and his quintet have chosen a musical route that not only shows the typical groove, time and solo chops, but also emphasizes color, interplay and both quiet and disquiet reflection.

The tracks on "Ten Minutes" are complex but not particularly knotty or thorny. They're more reminiscent of the interlocking nodes of Dave Holland's music, particularly "14" (which, ironically, is in 13/4), wherein every part is heard and rarely does one line have superiority over another. The volley between rhythm section and horn playing that's found on tunes like "Mother of Exile" is often unexpected, but not in a "pull-the-rug- from-underneath-you" way; it's more the dramatic irony of setting up and then subverting context. Grinder's music is mostly through composed, but engages in a little free playing on tunes like "Stayed," which is the most swinging but seems to have the least amount of restrictions, allowing pianist Manuel Schmiedel to get involved in some harmonic cycling.

Grinder's music, as well as the compatriots he chose for the record date, seem to have been tailor made to subvert boring virtuosity in favor of making music. The slow tone poem "Look" is built around an extremely delicate piano line, so much so that Grinder and alto saxophonist Charlotte Greve have no choice other than to be as thoughtful in their melody playing as possible. Greve is a great companion to Grinder's educated but unique playing; on the title track, her solo eschews playing the typical "verbose sax" chair of most trombone records in favor of unexpected entrances and directions, equally at home with long lines and middle- register musings. She's a welcome addition to the realm of young alto players like Jeremy Udden who've chosen to rely on their musicality instead of empty, boring agility.

Grinder comes out of a school built by bone players like Slide Hampton and continued by players like Ryan Keberle and Robin Eubanks, a sort of long-form melodicism peppered with the oblique. Grinder has a very complete sound on the trombone; it has a full resonance and speaks firmly in the middle and most attractive register of the horn. His attacks, sustains and phrasings touch the surrounding musical environment like sunbursts, as if he were dabbing with a large brush dipped in red watercolor. He's an intriguing addition to the language of the instrument, and his first effort gives a great deal of promise for his development.