Kenny Wayne Shepherd: Ten Days Out: Blues from the Backroads 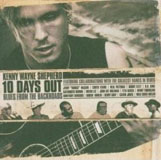 When guitarist Shepherd does a blues tour of the American musical south, he does it right: Ten days with friends Tommy Shannon and Chris Layton (Stevie Ray Vaughan's longtime rhythm section Double Trouble), plus a mobile studio and documentary film crew; starting from the mouth of the Mississippi River in New Orleans, to Shreveport, up to Alabama, up into Carolina then west to Kansas; visiting and performing with guitarists B.B. King, Clarence "Gatemouth" Brown and Hubert Sumlin, pianist Pinetop Perkins, harmonica player Jerry "Boogie" McCain and others, in their homes, backyards and favorite local dives; all culminating in Shepherd's performance with surviving members of the Muddy Waters Blues Band and Howlin' Wolf's band at the magically named Church at Blue Heaven Studio in Salina, Kansas.

Jerry "Boogie" McCain's "Potato Patch" turns one of those classic blues double-entendres where you can tell it ain't McCain's potatoes that somebody's been diggin'. Shepherd and company pound out the slow backbeat deep and mighty while McCain's harmonica wails over their churning chords to serve straight-up and hard blues, electric forged steel.

Performing his trademark "The Thrill is Gone" with B.B. King has to be a thrill that Shepherd wants to hold onto forever. King's vocal rides the beat hard, agonizing in its blues grip, then his guitar swaps wallops with Shepherd's, wringing hot blood and sweat from their respective necks. Close your eyes while listening and wonder if you're hearing the sound of some torch being passed.

The last four cuts feature Shepherd playing with a literal "Who's Who" of post-WWII blues: The Howlin' Wolf Band with Sumlin, Wolf's pianist Henry Gray and bassist Calvin Jones; the Muddy Waters Band with Muddy's longtime drummer Willie "Big Eyes" Smith and Pinetop Perkins on piano. Grey horsewhips everyone through "Red Rooster" as Butler rampages through the barnyard. Butler later steps out to front Dixon's tugging, insistent "Spoonful"; Sumlin steps out to front Wolf's "Sitting on Top of the World" in between.

Perkins closes the celebration by leading through the low-down, hard-driving "Grindin' Man," which is what Shepherd, Perkins and the Waters band do with this blues—they grind it down into fine powder then blow it away.

A portion of proceeds from Ten Days Out: Blues from the Backroads is being donated to the Music Maker Relief Foundation.