Home » Jazz Articles » Mark Isaacs Resurgence Band: Tell It Like It Is 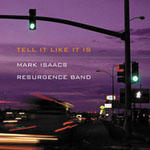 Australian pianist Mark Isaacs has been recording forward-thinking progressive jazz for the past 25 years. His new millennium recordings have garnered popular response, including Closer (Naxos, 2000), Keeping the Standards (Vorticity Music, 2003), Visions (Vorticity Music, 2006), and Resurgence (ABC, 2007). During the last decade, Isaacs has been approaching a new assertive sound that unifies the more scripted elements of adult contemporary jazz with the improvisatory elements of the music's first 100 years.

Tell It Like It is was recorded live the Sound Lounge in Sydney, Australia in August, 2008. Isaacs lead his quartet through eight original compositions of sharply honed modern jazz. "Minsk" opens the disc and is the collection's most provocative piece. Constructed over a simple descending piano figure, the deceptively modest piece provides Isaacs, soprano saxophonist Matt Keegan and guitarist James Muller acres of space in which to solo. "You Never Forget Love" is what the 20th Century ballad turned into when the clock struck 12:00 AM. Carefully paced and quiet, a duet between Isaacs and Muller dramatically evolves into a full ensemble piece featuring Keegan playing tenor.

The two-part suite, "Night Song," begins as a quiet nocturne with a lengthy melody that allows the song to develop, wave-like, into full realization. Isaacs is a master of writing pieces that are both emotionally complex and yet still orderly. Never does an Isaacs composition devolve into inane banging and clanging; this is music composed and performed for the listener, not at them. Wonderfully integrated, thoughtful and intelligent, Tell It Like It is continues Mark Isaacs musical journey, providing some of the best on the cutting edge of accessible jazz.