BY LYN HORTON
September 7, 2009
Sign in to view read count 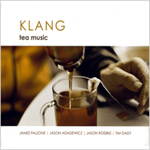 Four musicians from Chicago, led by clarinetist James Falzone, call themselves Klang, which is the German word for "sound." But Klang's debut, Tea Music, projects more than just sound; it goes deeper than that. The music is a re-examination of Jimmy Giuffre's combination of vibes and clarinet in his late-1950s ensembles. Bassist Jason Roebke and drummer Tim Daisy join vibraphonist Jason Adasiewicz and Falzone to create an album that alternates between fast and moderate rhythms; and haunting and colorful tunes.

Mostly composed by Falzone, with two pieces by Roebke and one by Daisy, the music possesses a smart, clean approach to the idea of homage. With no lack of articulate expression, these four instrumentalists infuse Giuffre's original vibes/clarinet concept with a totally contemporary twist.

Starting out in "G.F.O.P." with the clarinet and vibes completely in sync, the instruments then divide and go their separate ways, as if attached by tendrils to the thematic musical thrust. The resonance of vibes complements the tonality of the clarinet, and is nothing less than completely satisfying. The drums trip along to carry the lightness of a low-key bounce, and the bass supplies the polyrhythms to the drums' basis.

As the album progresses, the clarinet leads the group as the instruments rise and fall into prominent roles (bass, vibes, then drums in "Fickle" and drums, vibes and bass in "Oolong with Multiplicity"). Sometimes the players move into totally disorganized progressions ("Fickle," "32 Busonius," "China Black"), but nonetheless burst forth with uniform objectives.

Adasiewicz places his mallets with a touch that bends to the mood and dynamics ("Klang," "Dwarf"). He integrates and holds the notes of his instrument with elegance and influence ("Klang," "Klang...reprise"), playing a mere tad off the beat and filling the space with luminescence ("Dwarfs") as his sound falls into the swirling of the brushes on the snare. Additionally, and with perfect phrasing, Adasiewicz extends the clarinet's multiple notes to emerge as its alter ego.

Daisy's precision of squarely mapping the beat—slow or fast—is inescapable ("Fickle," "Dwarfs") and pleasing, as is his ability to launch into unusual improvisations ("China Black") and swoop back into the stream ("No Milk," "Giants"). In his own "Giants," Roebke demonstrates extraordinary ease with the upright, developing a deep blues motif out of one that is straight-ahead. He also provides a pensive and well-timed elucidation to accompany the personality of the moment ("Klang," "Dwarfs," "China Black").

Without Falzone, the members of the quartet would lack a pied piper; with him, they can go off on their own with confidence, knowing that the clarinet will rejoin them as tonally bright, pure, clear and full of energy as when the four began their journey. With Giuffre as his muse, Falzone has revealed how muses work. Using the clarinet/vibes combination, he has developed the art of the tune, which does not replicate the stylizations of the "swing and the pre-bop era" in which Giuffre became known, but takes the music to its 21st Century place.