By JAKOB BAEKGAARD
December 1, 2014
Sign in to view read count 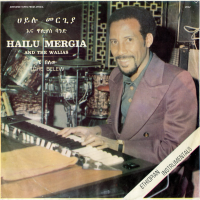 There is a musical moment of great significance in Jim Jarmusch's road movie Broken Flowers. The main character, Don, is going on a journey and has received a cassette with music. When he puts the cassette into the tape deck, the strange, deep and funky sounds of Ethiopian master Mulatu Astatke emerge from the speakers. Music like this has fascinated many listeners and the acclaimed series Ethiopiques, which has reached 29 volumes, speaks about the demand for Ethiopian sounds.

There is still a lot of great music to discover and, fortunately, Brian Shimkovitz, who runs the blog and label Awesome Tapes from Africa, has unearthed one of the true gems of Ethiopian music: Tche Belew by Hailu Mergia and the Walias. As it is pointed out in the excellent liner notes, the album does not belong to the golden age of Ethiopian music, which is considered to be the period from the early 1960s to the mid- 1970s. However, the instrumental album, released in 1977, has become a true collector's item and it is easy to hear why.

Bandleader, keyboardist and arranger Hailu Mergia gathered a strong group for the recording of the album, including saxophonists Moges Habte and Abebe Kassa, drummer Temare Haregu and special guest Mulatu Astetke on vibes. At the time, Mergia had been working the nightclub-scene in Addis Ababa and knew how to create funky and elegant sounds, but Tche Belew broadened the musical palette, with no less than four of the band members helping out with the arrangements to create a diverse canvas of sound.

There are elements of jazz on the swaying, swinging rhythm of "Yikirta Lemminalehu" with Astatke's chiming vibes and walking bass patterns from bassist Melake Gabrie while "Lomi Tera-tera" is all wah-wah guitar, subtle percussion and spiraling arabesque organ figures from Mergia.

Mergia was influenced by organist Jimmy Smith and there are traces of soul, blues, jazz and funk in the band's deep instrumental cuts, but all these genres are filtered through a specific Ethiopian sensibility, with the characteristic scale system playing an important role. It is also about the lush contrapuntal clarity and balance between the instruments. Especially the use of both organ and piano is successful, with the added power of the horns and a rhythm section that is both swinging and tight. Tche Belew shows how sophisticated funky music can be and it is an album that connoisseurs of Ethiopian music should not be without.