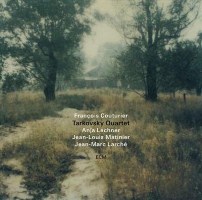 He may have passed away a quarter century ago, but the spirit of Russian film director Andrey Tarkovsky continues to loom large, and not just in the world of cinema. The connection between film and music has long been an intimate one, dating back to the early silent days, when pianists provided a live (and often improvised) soundtrack in theaters around the world. It's hard to imagine many films without the scores that not only add weight to the narrative, but stand alone as independent, self-contained works. But beyond actual scoring, there are artists who find inspiration in the oeuvre of film directors, with French pianist Francois Couturier's ECM debut, Nostalghia—Song for Tarkovsky (2006), and follow-up solo piano recital, Un jour si blanc (2010), both revolving around music—both written and created spontaneously—inspired by Tarkovsky's compelling imagery and dramaturgy.

Tarkovsky Quartet reunites the group from Nostalghia, and wraps up Couturier's trilogy of Tarkovsky-inspired recordings on notes both strong and sublime. Couturier's penchant for elegant lyricism has been fundamental to his ECM recordings including 1998's duo session with violinist Dominique Pifarély, Poros, and, more recently, with oudist Anouar Brahem on 2006's Le Voyage de Sahar, and he brings a similar romanticism to the opening "A celui qui a vu l'ange," patiently extrapolating on its simple theme a capella. Accordionist Jean-Louis Matinier (another Brahem alum) and cellist Anja Lechner (who straddles the increasingly fuzzy line between ECM's regular and New series) soon join in, weaving intricate tapestries, but it's not until the eight-minute composition's half-way point, when soprano saxophonist Jean-Marc Larché makes his first appearance, that the music truly begins to take flight.

As poignant as Couterier's writing is, it's his use of these four instruments, in arrangements that seamlessly explore various permutations and combinations—solo, duo, trio and quartet, often within the context of a single piece—that gives Tarkovsky Quartet its rarefied air. The blending of two reeds, Marché's saxophone and Matinier's accordion, creates an irresistible symbiosis—one that's also been explored on saxophonist Trygve Seim's duo record with accordionist Frode Haltli, 2008's Yeraz, but here, comingled with the expressive tone of bow on string, and given rhythmic life by Couturier on tracks like the haunting "Tiapa," there's even greater synchronicity amongst the four musicians than on Nostalghia.

Three spontaneous compositions bring an oblique edge to Tarkovsky Quartet, though "Le main et l'oiseau" comes together with such implicit form as to belie its in-the-moment creation, while the structure of Couturier's "Mouchette" is so abstruse as to feel more like a spontaneous creation.

An extemporaneity that defines the set, whether it's the flitting freedom of "Sardor," or the more interpretive nature of "Maroussia," one of two pieces referencing compositions by J.S. Bach. If Tarkovsky Quartet is, indeed, an ending, then hopefully it doesn't mean the dissolution of this remarkable group, whose seamless integration of timeless autoschediastic élan with classical concerns from centuries past has them carving out a personal space in the realm of contemporary improvised music.