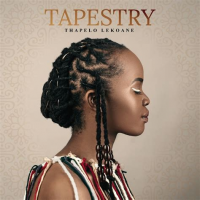 Tapestry is Thapelo Lekoanes' stunning debut album. Lekoane is a South African artist with a long-standing career as a music director, vocalist and songwriter. Through these experiences, Lekoane has noticeably drawn from a deep well of jazz, folk, soul and world influences to produce this work. These influences are present in the album's sound which has a global appeal whilst maintaining an African texture. In what she calls "folk-soul," Lekoane's voice waltzes through this sound to deliver strong emotional pieces.

The 10-track album consists mostly of English-language songs with various touches of Spanish, Tsonga, Zulu and Tswana. Tapestry's world influence is best felt in the song "Saber (To Know)," where the use of Spanish is a refreshing turn which feels natural to the album's overall world-embracing sound of folksy percussions and acoustic guitars. In other places, Lekoane weaves in her local South African touch with the catchy Tsonga intro in "Human" and also on the reprise where she playfully blends languages around the ubuntu philosophy, singing "Umuntu ngumuntu ngabantu" (I am because of who we all are). Such creative melodies reflect the colourful palette of languages and genres this album displays.

Lekoane cleverly avoids the trap many classically trained artists fall into—that of sounding inaccessible or too niche prone for pop / urban audiences. In this instance, Tapestry's inobtrusive instrumentals and infectious melodies are simple enough for the pop fans to fall in love with whilst being complex enough for jazz musos as well. The anthemic song, "Ikhaya" is testament to that mixture with its use of a folky tempo, and a resounding chorus repeatedly inviting listeners to sing along.

Lyrically, the album has multiple thoughts on the human experience. Written by Lekoane, who skillfully pens stories aimed to inspire listeners not to give up on people who've disappointed them ("Human"), and to remember where they come from ("Heritage"). It is clear that Lekoane has thought deeply on what makes the tapestry of being human, from the challenges faced and what keeps people going. These reflections and questions on the human experience make for a mesmerizing journey of faith, hope and love.

Standout tracks include opener "Human" and the reflective "Anyway," which have intimately warm vocals reminiscent of Lizz Wright, and tender guitar sounds echoing Corinne Bailey Rae from her earlier work. "Why" and "More to Tell" both have world class arrangements where the string ensemble produces a cinematic soundscape coupled with Lekoane's light storytelling strokes that craft beautiful crescendos and momentous climaxes, all adding a magical signature to the music.

Tapestry is a compelling entry into the contemporary jazz and urban music scene, where the latter is dominated by house, hip-hop and pop on streaming and radio platforms. Despite this, for a debut album, Tapestry is a mature and cohesive recording which boldly introduces Lekoane as an imaginative, genre-bending artist with a potential to reach into diverse audiences.