By BRUCE LINDSAY
January 9, 2011
Sign in to view read count 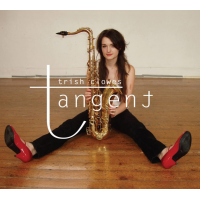 Trish Clowes' Tangent is an ambitious project that brings together free improvisations, small band numbers and full-scale orchestral pieces to create a fascinating collection of new music. Projects of this scale in jazz are far from easily achieved, and the fact that this is composer, leader and tenor saxophonist Clowes' debut—recorded at the age of 25—renders her ambition, and the project's success, praiseworthy, indeed.

Clowes is accompanied on Tangent by some of the brightest and most innovative of Britain's jazz musicians, including the superb bass and drums duo of Calum Gourlay and James Maddren, trumpeter Freddie Gavita, pianist Huw White and guitarist Chris Montague. In addition she has drawn together a fine orchestra that includes jazz players such as bass clarinetist James Allsopp, as well as some excellent young classical players. Pianist Gwilym Simcock, who also produced the album, plays on two numbers.

Clowes' tenor playing, which has been compared to that of Stan Getz, is warm and economical. She also appears to be a refreshingly democratic and modest leader—there is nothing here that simply acts as a showcase for Clowes' tenor. Indeed, there are opportunities for Clowes to assert her own playing much more than she actually does. Her own solos are usually brief, and often in the middle of the mix rather than out in front, especially in the tunes that feature the larger instrumental lineups. As a result, other musicians sometimes make the most immediate impact—cellist Heidi Parsons on "Search," for example—while Clowes doesn't even appear on "Chalk," one of three improvised pieces.

Clowes' own instrumental voice is most clearly presented on the other two improvisations, with "Duet" the simplest and the most accessible. Clowes follows trumpeter Nick Smart's lead on this jagged, angular, piece, her soft-toned tenor initially acting as a counterpoint to Smart's brighter and more assertive playing until the two eventually swap roles and Clowes becomes dominant. On "Blues for Frisell," Clowes combines smoky, bluesy playing with Montague's loosely strummed guitar.

Both of the full orchestral numbers, "Sketch" and "Coloured Eye," are complex, multilayered, compositions—the latter blessed with a rich string arrangement, which complements Kathleen Willison's vocal interpretation of Jessie Jones' lyrics, and Clowes' sweeping solo. However, the tune that best showcases Clowes' range of abilities is "The Master and Margarita," inspired by Mikhail Bulgakov's eponymous novel. It reflects the mystery and energy of the novel—the atmosphere is set up immediately by emphatic playing from Clowes, Maddren and cellist Louise McMonagle—as well as demonstrating the young saxophonist's ability to write and arrange for a small ensemble.

Tangent is an impressive debut which makes clear Clowes' emerging talents as a musician, composer and arranger. With her abilities established, Clowes has the potential to become a distinctive new voice on the UK jazz scene.