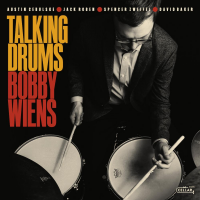 If drums could talk, Bobby Wiens' kit would no doubt have some nice things to say about how he enlivened and supported his teammates on this tasteful quintet date that was recorded in July 2020, with masks and social distancing, at the UNC Studios in Greeley, CO. Apparently, the quintet were then students at the University of Northern Colorado; if true, they learned their lessons well and were more than ready to test how readily that knowledge might harmonize in a working unit.

Wiens wrote one of the album's eight engaging numbers ("Bill"), as did pianist Spencer Zweifel ("Speaks Volumes") and tenor saxophonist Austin Cebulske ("A la Georgie"). Bud Powell is represented by the boppish "So Sorry, Please," Hank Jones by "Little Rascal on a Rock," Harold Mabern by the bustling "Beehive," which serves as the session's robust fire- breather. Completing the menu are Tony Crombie & Benny Green's melodious "So Near, So Far" and a traditional folk song, "Doll of the Bride" (country of origin unnamed).

Everyone is given ample room to blow, with guitarist Jack Roben and bassist David Baker especially sharp and sunny on their feature, "So Sorry, Please." Wiens solos there too, as he does to good effect on most other numbers, while Cebulske and Zweifel add strong solo voices whenever summoned. "A la Georgie" is a rhythmic delight, its pleasing cadence punctuated by Wiens' muscular solo, a sunlit prelude to the elaborate and esoteric "Doll of the Bride." Jones' playful "Little Rascal" (with clever solos by all hands) leads to Wiens' mild-mannered "Bill," "So Near, So Far" (on which Cebulske, Zweifel and Baker shine) and the frenetic finale, "Beehive."

Talking Drums, Wiens writes, arose from a Master's recital at UNC that was canceled owing to the coronavirus pandemic. Seizing a chance to make lemonade from that lemon, Wiens and his schoolmates "masked up" and headed to the university's studio to record together before going their separate ways. The Master's program's loss, as it turns out, is everyone's gain, especially those who may chance upon this splendid album.

Speaks Volumes; A la Georgie; Doll of the Bride; Little Rascal on a Rock; Bill; So Near, So Far; The Beehive.