Michael Brecker: Tales From the Hudson

By Dave Hughes
November 1, 1997
Sign in to view read count 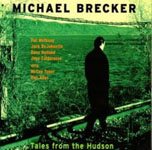 In the crowded field of excellent tenor players, Michael Brecker rises to the top of my list. I think the thing that gives Brecker an edge over the others is the fact that he is a master of so many genres of jazz. Many people are no doubt familiar with the electric, funky side of Michael Brecker as the co-leader of the Brecker Brothers and former member of Steps Ahead. He has done significant pop dates with Paul Simon, Carly Simon, and Joni Mitchell. One could easily fill a CD collection with albums on which he has performed as a sideman in many jazz contexts.

Yet this is only his fourth CD as a leader. All of them have been in the modern, progressive, straight-ahead jazz vein. This one is, to my ears, his most successful outing yet. I think the difference is that this one is a little less "progressive" or "outside." The melodies here are a little more accessible and memorable, yet the soloing is just as creative and adventuresome as we have come to expect from Brecker and the other jazz luminaries on this CD. The top-notch team of sidemen here are Pat Metheny on guitar, Jack DeJohnette on drums, Dave Holland on bass, and Joey Calderazzo on piano. Pianist McCoy Tyner and percussionist Don Alias are added on two tunes.

Six of the nine compositions are Brecker's. They are varied, thoughtful, and provide great vehicles for improvisation. Metheny contributes "Bilbao" from his Travels album, Calderazzo contributes a medium tempo swinger, and "Willie T." comes from the late pianist Don Grolnick, who produced Brecker's first two solo albums and performed with Brecker frequently.

I would especially recommend this album to those who have come to jazz through the "new adult comtemporary" door and are ready to take the next step towards discovering what real jazz is all about.