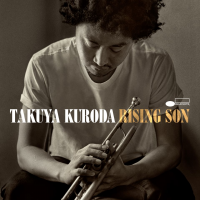 Remember D'Angelo? Takuya Kuroda and his producer José James certainly do—this excellent collection has that loose, swampy, stoned feel from 'Voodoo' closer than anyone since, putting across that feel of thick, still air on a scorching hot, languid, afternoon perfectly. D'Angelo worked because he signposted a way to fuse the classic jazz influenced soul of say Marvin Gaye, Smokey Robinson, Al Green and even Prince to modern hip hop grooves without diminishing either genre. By putting that sound into a soulful jazz context Kuroda has arguably chosen to accentuate one of the elements in that original mix so that the whole can be kept fresh sounding while new possibilities can be explored by his excellent band.

The key to getting this sound right is the choices of personnel and instrumentation made by the bandleader and Kuroda clearly knows what he is doing. So, for instance, Corey King's trombone adds to the feel of warmth that fits well with the Afro-beat influence that emerges on a couple of tracks and Kris Bowers opts for the more muted tones of the Fender Rhodes on all but one of his featured tracks. The Afro-beat influence probably bubbles through from Kuroda's 6 years in the Brooklyn based Akoya and he has spoken in interview of how that gig was important in teaching him the importance of musical feel as opposed to say the more musical theory orientated dues paid by the modern classical or jazz musician. Lionel Loueke's inventive and unconventional guest spot solo on "Afro Blues" is a good example of how to keep that looseness or feel within an original rhythm pattern, but still find a way to take it further. As Kuroda put it simply in a recent interview, Loueke "killed it."

Kuroda and James have worked together in James' band since the singer's Black Magic collection of 2010, and the more groove led approach was apparently at the latter's instigation. James himself contributes an impressionistic vocal cameo on the first of two Roy Ayers' covers—the successful trip hop update of "Everybody Loves the Sunshine." The core quintet are clearly comfortable with the musical direction and play beautifully throughout, showing a great understanding for example in the uplifting call and response interplay between Kuroda and Corey King on tracks like "Piri Piri" and title track "Rising Son."

That is not to say that the album is all about soulful, Afro-beat dynamics however—one of the highlights is the gentle sensitivity of "Sometime, Somewhere, Somehow" whose melancholic trumpet and shuffling beat was apparently inspired by the significant loss of Kuroda's grandfather. On "Mala" too the band do a reasonable approximation of the early Blue Note work of Erik Truffaz or maybe even the sort of territory that Nils Petter Molvaer explored in the late 1990s, but this is far from a straight bop album.

While Kuroda has expressed a desire to return to playing the more straight ahead jazz of his previous work, here the seam of creativity that runs through this modern fusion collection appears far from exhausted. As a debut for Blue Note the album was clearly intended to make a statement and it succeeds admirably on its own terms. Let's just hope Kuroda manages to follow it up somewhat quicker than D'Angelo has managed with "Voodoo" where the clock currently approaches 14 years!