Gregory Porter: Take Me To The Alley 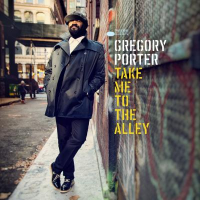 The ineffable charms of Gregory Porter can't help but woo and win over the ear. He's the epitome of soulful sophistication—part tender poet, part cogent preacher, fully a man of the people—and he has a voice that can make the angels weep. While we often bemoan the choices that fame's fickle index finger makes, it pointed in the correct direction this time. Gregory Porter is everything he's cracked up to be and more.

Take Me To The Alley, Porter's follow-up to the Grammy-winning Liquid Spirit (Blue Note, 2013) and his fourth album in total, is a passion-fueled collection of music filled with inspired heart-on-sleeve meditations, from-the-mountain-top sermons, glimpses at what could've been, and musical testimonials. It's completely in keeping with his previous work—full of emotional highs and lows, built on a blend of the earthy and cosmopolitan—and just as addictive. It only takes one listen to get hooked.

Each one of Porter's earlier albums produced a number of earworms and emotional wallops. Water (Motéma Music, 2010) gave us politically-charged fire and brimstone in the form of "1960 What?" and introspective gold in the shape of the title track; Be Good (Motéma Music, 2012) had more than its fair share of winners, from the enthusiastic, history-tracing "On My Way To Harlem" to the familial reassurances of "Real Good Hands"; and Liquid Spirit boasted a seemingly endless array of treasures—the fragile-turned-resolute "No Love Dying," the exhilarating "Liquid Spirit," the love-stricken "Water Under Bridges," and so on and so on. Take Me To The Alley, likewise, traffics in the eminently lyrical and memorable.

Three of this album's choicest cuts come right at the top of the program. The opener—"Holding On"—finds Porter sorting out his feelings in an understated setting that's enriched by Keyon Harrold's muted trumpet. It's worlds away from the dance-friendly version of the song that he recorded with British electronic duo Disclosure. Second up is the swoon-inducing "Don't Lose Your Steam," a Stevie Wonder-worthy original with R&B, soul, funk, and rock in its DNA. Porter testifies and brings the thunder, the horns riff, the rhythm section locks in the groove, and organist Ondrej Pivec adds the glissandos and the grease. And then comes the title track, a sedate presentation that finds Porter harmonizing with Alicia Olatuja and exploring the topics of healing and spiritual renewal.

Those three numbers, near-perfect as they are, make the album a bit top-heavy. But there are more gems to be found further on. "In Fashion," an irresistible number underscored by Chip Crawford's marcato quarter note chords and focused on a man's paranoia and obsession surrounding the dressings-up and goings-on of a woman, is one; the gospel-inflected, love-concerned "Don't Be A Fool" is another. Those looking for an explanation behind the meteoric rise and continually growing popularity of Gregory Porter need look no further. The explanation is right here in that voice and the songs it sings.

Holding On; Don't Lose Your Steam; Take Me To The Alley; Day Dream; Consequence of Love; In Fashion; More Than A Woman; In Heaven; Insanity; Don't Be A Fool; Fan The Flames; French African Queen.