By TAEKO KUNISHIMA
September 21, 2012
Sign in to view read count 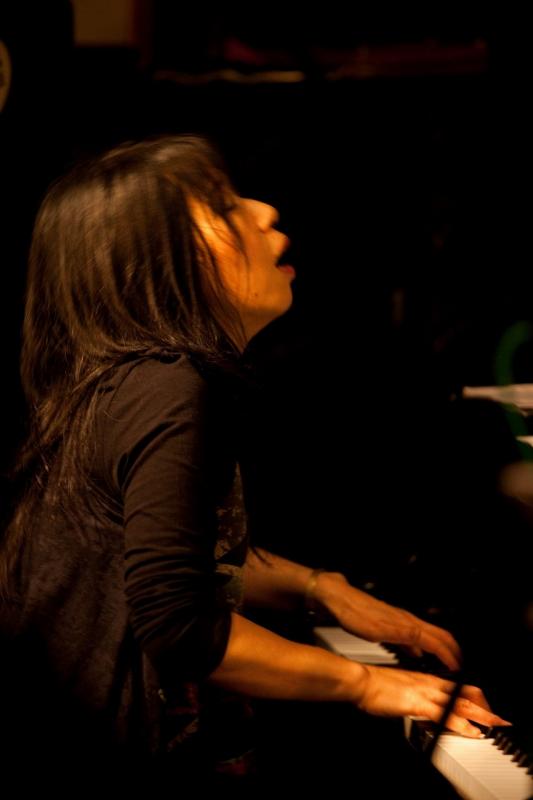 Meet Taeko Kunishima:
Taeko Kunishima started playing piano at seven. Particularly taken by Mozart and Beethoven, she later studied classical piano performance at university. On hearing Miles Davis for the first time, her direction changed, leading her to explore the music of many different jazz artists, and to develop her own improvisatory technique whilst studying jazz harmony.

Since moving to England, she has continued to evolve and develop her startling, angular contemporary jazz approach, echoing Thelonious Monk and influences from her native Japan. Alongside her work with many UK jazz artists, she has also been working with musicians from many different cultures and countries and has built up an impressive range of musical partnerships, ranging from Latin pop to electronic music and contemporary classical music.

She has released three albums on 33Jazz label, and received favourable reviews; the band has been warmly received at live performances including the Isle Of Wight International Jazz Festival, London Jazz Festival, and Vortex Jazz Club. In the autumn of 2006 she completed a UK tour with the help of Jazz Services.

In May, 2011 she recorded her third album, Late Autumn (33Jazz). The album draws inspiration from Japanese master film director Yasujiro Ozu, as well as the all-too-brief life of Taeko's father. Taeko is very excited about the challenge of this new album, which mixes her natural lyricism with Japanese surrealism and fast, swinging American jazz.

Your sound and approach to music:
I try to be honest with myself when composing, sounding out new concepts as I write. The influences come from Japan, western classical music, ethnic sources and modern jazz. I have lived in UK, Japan, and the Middle East.

Your dream band:
I would like to play with the same musicians who recorded my latest CD, Late Autumn. I hope to keep working with them; they really inspire me.

Road story: Your best or worst experience:
At one of the smallest venue gigs I had the biggest ever walkout—those persons being uniformed members of the Chinese army in London!

Favorite venue:
I have no particular favorite; UK, Germany and Japan have such a variety of atmospheres and acoustic ambience, from echoes to whispers.

Your favorite recording in your discography and why?
My latest CD, Late Autumn. This album is partly a story of my life, being true to myself. It was recorded as a live session and we had such a wonderful time at the 33 Jazz studio for two days.

The first Jazz album I bought was:
I think Miles Davis' Kind of Blue.

What do you think is the most important thing you are contributing musically?
Incorporating the influences mentioned earlier, with a careful melodic compositional approach which serves to contrast with the live improvisational approach; taken to the tonal limits, on occasion.

ADVERTISEMENT
How would you describe the state of jazz today?
Like scat singing, it thrives on being unpredictable. In the UK there are probably more people learning jazz than ever before, on courses, in workshops—and, of course, live sessions. The old categories with in jazz can be broken down without artist being slowed down.

What are some of the essential requirements to keep jazz alive and growing?
With respect to jazz's audience, it is impossible to make rules and regulations. The artists create work in their own chosen terms. I try to include visual references with film on YouTube, the online world being as much visual as it is musical.

What is in the near future?
I continue to work on compositions, still maintaining the same influences while taking in new music from young and old artists, from Broadcast to Takemitsu.