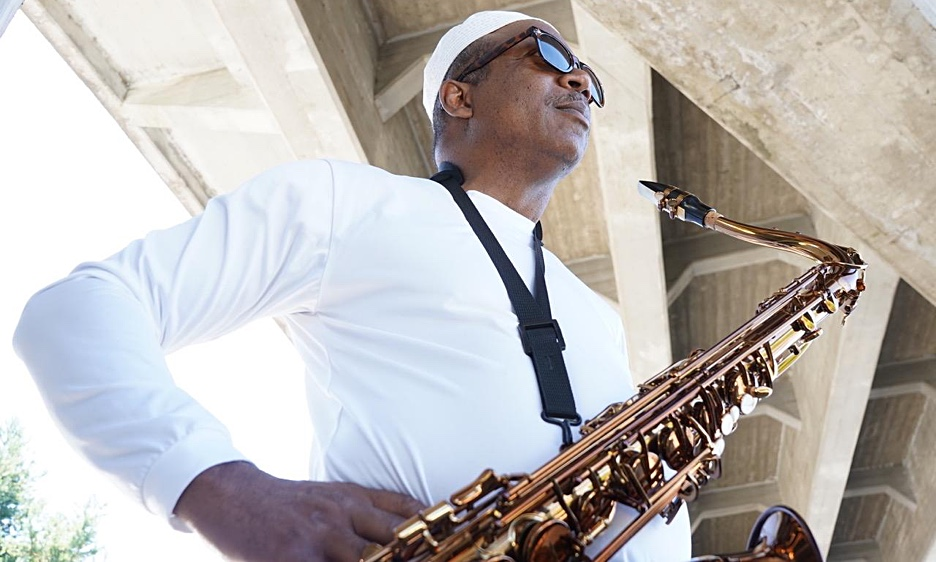 By KENNEY POLSON
January 15, 2019
Sign in to view read count
About Kenney Polson

Jazz saxophonist Kenney Polson is an accomplished performer, recording artist, composer and educator. Based in the Pacific Northwest, he has performed in over 50 countries. Known widely as a smooth jazz artist, his seasoned musical style incorporates Latin, classical, New Age, rhythm & blues, funk and gospel influences with a strong foundation on straight ahead jazz.

He has toured Japan, Korea, Hawaii, Colombia, Brazil, and over a dozen Caribbean Islands. In 2016 and 2017, he toured extensively with Rick James' Original Stone City Band playing major festivals such as Capital City Jazz Festival on the East Coast and Orange County Funk Fest in California. See this interview and his website for much more!

I also make good use of a soprano saxophone (Selmer Series III) I had a Selmer Mark VI before this one but the Series III has a more centered tone and it is much easier to play the higher notes because of the way the palm keys are designed. Love it!

I'm a teacher myself and those who shepherded me along left quite an impression, so this is a great opportunity to say, "thanks."

I come from a very musical family. They were my very first influences. Just about everyone played an instrument and sang. Mom and two of my three uncles sang and played piano. My grandfather, "Chubby" Wayne Harshaw, was an outstanding entertainer. He was a singer, dancer (tap and soft-shoe) and emcee. Our family is from Kansas City and grandfather worked with Count Basie, Cab Calloway, Julia Lee, Baby Lovett, Andy Kirk, and most of the traveling musicians that came through Kansas City during his heyday. I wrote a tune in his honor called "Chubby Wayne" that is his voice at the end of the selection.

My Uncle Charles used to sing with the Coasters and the ladies loved him. I wrote a tune in his honor called "Uncle Famous." With all the talent in my family and the history behind my grandfather and my uncle, it made it very challenging for a young dude like me to make a mark. In fact, my folks wanted me to make something of music, but when I was first getting started I just wanted to teach music in public school. It was a steady check; I had health benefits, and summers off. Kind of hard to walk away from that situation after one gets used to it. It wasn't until I started thinking about recording my first CD that I began to get serious about writing music compositions and wanting to be a saxophonist. On the way to getting myself together with composition and the saxophone, I met some very influential people who were kind enough to share their gifts with me.

I earned my master's degree in music from Howard University in 1997. My focus was jazz composition and arranging. I can't tell you what a great climate that was for me to work in. I'm still reaping the benefits. I especially want to thank Charlie Young, III, Reppard Stone, PhD, Fred Irby and Art Dawkins, PhD.

While in Brazil, I studied privately with Idriss Boudrioua (from 1992-95). Much earlier (from 1977-79), I learned the importance of being able to play more than one instrument from Eiji Maruko, woodwind instructor at Fresno Community College. While there, Mr. Gilbert Rodriguez taught me how significant and important it is to set an example for students who look like me. Mr. Sandy Shaeffer was also an influence. For well over a decade, Bob Russell, Teaching Mentor for Fresno Unified Schools, gave me insights on the technique and joy of teaching.

From the days of my youth in Bakersfield, California, I'm grateful for my High School Band Director, Colonel Wesley Moore and for Mr. Ben Turner, who was my Band Director at Lincoln Jr. High School. He allowed me to join band and introduced me to the saxophone.

It was when I won talent show in high school. I had always enjoyed playing saxophone, but had never given it a serious look when asked what I wanted to do in life. While in the talent show, I played a Grover Washington Jr. selection and received a very good response from the audience. What a great feeling! That was when I knew I wanted to do something that involved music.

I approach music from a melodic sense. There is nothing better than the ability to have a strong melody over nice grooves with great chord structure. Moreover, I like a saxophone sound with a rich tone. I have problems with a thin piercing sound. A warm tone is very important to me.

I have a friend, whom I hired to perform with my high school band as special guest. I asked him to come up and get down for a fundraiser that we were having. The economy was not at it's best at the time and schools were cutting music funds left and right all over the country. Regardless of our dire situation this friend whom I had known for 30 years (Fred Wesley) took time out of his busy schedule to participate in our fundraiser. We were able to raise money to help the band program because of his good name.

After the high school band performance was over, we had a gig in a local club called Jimmy Mak's and many of the towns top musicians were attending because they knew Fred would be there. Some of them performed with us in the band at the club. Other sat in and jammed on a few selections. It was a great feeling and experience when Fred Wesley introduced me to the local musicians as his good friend of many years. We had a lot of fun that playing both funk and jazz tunes, trading solos, and sharing stories throughout the night. Just like old times. It was a great experience for me!

Jimmy Maks in Portland, Oregon had great acoustics, treats musicians really well, has a nice intimate setting and gets a great crowd. The venue was also very gracious when I needed a venue for a high school jazz band I directed. They were a good group with a very good following and Jimmy always accommodated us when we were seeking a venue for a fundraiser or just wanted to perform.

My favorite recording is on the Paradise CD, called "Only With You." I really like the melody and the chord changes to that selection. In addition, I enjoyed the production of that song. I remember my composition teacher at Howard University, Dr. Reppard Stone who constantly told me to make sure to do something special with the melody when it comes back around a second time, because it keeps the listener engaged. I applied that theory when I recorded "Only With You." If you take a listen you will find that the melody comes around three times. The first time I play it on Alto with as much feelings as I can, the second time I add an octave higher to the melody, and the last time around I add five saxophone parts to it. I don't know about anybody else but it certainly keeps me in engaged when I hear it, not to mention giving me a great sense of satisfaction and accomplishment!

I believe the most important thing I am contributing are interesting and well-constructed smooth jazz compositions. I believe I write selections that are memorable with singable melodies. I don't particularly care for selections with just a groove and no real structure. That type of tune gets old to me very quickly, so I make it a point not to do the same with my own smooth jazz compositions. I'm sure my training at Howard University has a lot to do with that!


After traveling to and performing in several countries I decided on one occasion to buy a 5' x 4' flag from the country I was visiting. When I got home I hung it on my bedroom wall. It looked very nice and when family came over they asked me about the flag and it turned out to be a great conversation piece. So, the next time I went to a different country I brought the flag of that particular country home and hung it on the wall next to the first flag. I really liked it and I decided to buy a 5' X 4' flag from every country in which I would visit. After lots of travel and many countries, the flags are now more like wallpaper and the flags are also displayed in some other rooms in the house! It's nice when a person comes over and sees a flag from a country in which they have visited.  It's even more special when a person from another country visits and sees the flag from their homeland on my wall. I only buy flags from places where I have been. Moreover, I only buy them while I am in the country in am visiting. For me, it makes it more authentic! I've been to 50 countries, but since I started a little late, I don't have 50 flags. I sure hope to get there one day soon!