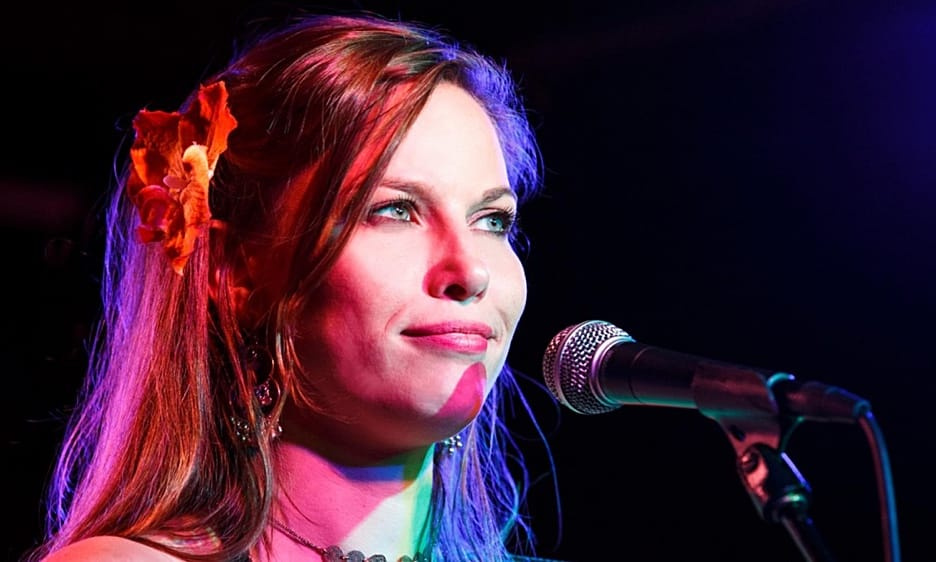 By KATE THOMAS
February 7, 2020
Sign in to view read count

Kate Thomas is a London based singer and singer-songwriter with influences from jazz, Latin and world music. So where did all these influences come from? Well, the soundtrack to Kate's childhood was mostly jazz, with the likes of Ella Fitzgerald, Billie Holiday and Frank Sinatra featuring prominently. Kate's grandad 'farvie' was a well-known drummer in East London; playing regularly at Ronnie Scott's and at the Krays' now notorious R&R club. Kate then began performing professionally herself at 16, singing Italian Opera in a local venue and from this moment on... Kate continued to travel the world performing in many different genres and languages. Kate now performs regularly at the well established jazz, roots and world music venues in and around London performing her eclectic blend of jazz, Latin and world music. Kate is currently performing her show "A Journey Through Bohemia" which is a place where both standards and original music meet. Kate has been recognised for her songwriting in the UK and back in 2017 in anticipation of her debut EP The Lion's Raw Kate received support from PRS for Music to perform at the ASCAP Expo in Los Angeles.

Most recently Kate released an original nu-jazz single "How Did I Get Back Here Again" with Howl from the Embers which is currently piquing the interest of various jazz radio stations and publications. Kate's recent notable gigs include: Acklam Village (Supporting the London Gypsy Orchestra), The Bulls Head Jazz Club, The Green Note, BTL Jazz, Jazz Verse Jukebox (Headliner for BBC Radio's Jumoke Fashola's annual "Ones to Watch") at Hoxton Hall, Toulouse Lautrec, Spice of Life, The Boisdale (Finalist in the Battle of the Bands 2014) and following in her grandad's footsteps... Ronnie Scott's.

I am predominately a vocalist and songwriter but I am also known for playing my flamenco guitar especially when performing my original material.

I was always struck by the raw emotion of Billie Holiday, the technique of Ella Fitzgerald and the phrasing of Frank Sinatra. I am also heavily influenced by nu-jazz artists like Madeleine Peyroux, Melody Gardot and Liane Carroll. But I also want to mention the people that have informed my Latin, Gypsy and world music tastes such as the Gypsy Goddess Esma Redzepova, Astrud Gilberto, Zaz, Edith Piaf, Hindi Zahra, Yasmin Levy, Lhasa de Sela and I must not forget Pink Martini—those guys are so much fun and when they say they are eclectic they really mean it!

It was always there in my family. To be honest all my family sing really well and play instruments so I really didn't think it was a "special" thing as I thought everyone could sing and play at least a little bit. I guess it wasn't until I was much older that I started to take it seriously as a profession and I have been "working it" ever since. It is a tough industry especially when you take those steps to go full time but as long as you work hard, diversify and be entrepreneurial you can survive it and let's be honest jazz isn't going anywhere! Everyday I am grateful that jazz chose me!

With my influences coming from jazz, Latin and gypsy music I am eclectic to say the least. My sound is raw, emotional and authentic but that doesn't mean that it is all sad ballads. I truly believe you need to take people on a journey and use lots of different colours—we are artists after all! So you can expect to laugh, cry and dance at one of my gigs. My approach is very simple I really want to connect with people so I make it accessible. I don't want to alienate anyone. I am sure I am not everyone's cup of tea and that doesn't really matter—what is important to me is that I don't want people to feel that because they don't know enough about jazz, Latin or world music that they can't understand it and connect with it.

The best piece of advice I was given when I was in training was "to be human is enough!" Authenticity is so important—for me you cannot connect with an audience without it.

Can I say orchestra here? My music is so diverse moving from your jazz ballads through to Latin and Gypsy music an orchestra should just about cover it! I would love to throw some names at you though and as I am particularly obsessed with guitars let's talk guitarists! Django Reinhardt, Paco De Lucia and Pat Metheny! To perform with these guys would simply .. set my soul on fire.

One of my best and worst experiences was singing at Glastonbury Festival. As I was heading over to the stage I got epically stuck in mud. I was crying my eyes out because I couldn't believe I was going to be late or potentially miss my Glastonbury debut and all because I was stuck in mud! What a ridiculous reason to miss a gig! But no fears readers, three people managed to pull me out of the mud minus my shoes and I walked straight from the auditorium onto the stage and sang my socks off!

This is a difficult one to answer as there are so many great jazz venues in London so I will talk about my top two and for very different reasons. I regularly play at the Green Note in Camden. It's beautifully intimate and there is a strict policy there that there is no talking whilst the bands are playing. The sound is incredible and you can guarantee that on any night of the week you will be watching something special. The close proximity and the connection that you can get between the audience and performer is something rare and magical. Then on the other end of the scale just over in East London I also had the pleasure of performing at Hoxton Hall for BBC Radio's Jumoke Fashola's "Jazz Verse Jukebox." The event itself is special and is a night that brings together jazz and poetry. Hoxton Hall is grand space and is an old Victorian Music Hall so it is steeped in history. I had the absolute pleasure of being the Headliner back in 2018 for their annual "Ones to Watch" concert. I remember singing on that stage to the silence, the sound was incredible, the lights were so strong and I couldn't see a thing past the stage. I was completely blown away when we finished our set and we were met with a rapturous applause, hoots and I am told a standing ovation. I had almost forgotten all those people were there! So there you go, jazz rocks in London from the intimate venues through to the concert halls!

It is without a doubt my latest single "How Did I Get Back Here Again;" it's raw, emotional, bare and authentic. I had the pleasure of working with some incredible jazz musicians on the single and it was produced by the brilliant P B Anderson. This single really reflects who I am right now so I can't wait to get back into the studio and do the same again sooner rather than later!

I am making new jazz influenced music, accessible jazz music and I am also making music in a space that is heavily dominated by men.

I am obsessed with languages (please bear in mind though that I have knowledge of many but I am master of none—so don't test me or anything!) I studied Russian when I was 16 and one day my neighbour back in my little home town of Laindon in Essex knocked on the door and told me that he had met a lovely Russian woman whilst he was working in Spain. Now the very fact that he knocked on the door to tell me this was in itself weird. Anyway, to cut a long story short I ended up having to translate a love letter into Russian.

Billie Holiday's Lady in Satin that song "I'm a Fool to Want You" had me at "I'm."

As I said earlier, I don't think jazz is going anywhere but if we want it to grow I think the key lies in education and accessibility. I was introduced to jazz from the moment I was born because of my family, but the majority of people in my neighbourhood for example saw jazz as something for "posh people" and would run a mile. It is important that jazz is made accessible to everyone not just the lucky few. We also have the issue now with musicians struggling because of streaming, etc. and people not buying music so there needs to be a lot more education for musicians so that they can survive and keep making jazz. Oh, I could go on and on I am very passionate about this subject so I am going to stop myself there!

I am going back into the studio to record my next single and I will continue to take my show "A Journey Through Bohemia" to the jazz, roots and world music venues in London and beyond.

Forgetting lyrics or breaking a string!

It changes from shower to shower but I was really going for it with my version of "Voi Che Sapete" from The Marriage of Figaro the other day!

I am a full time musician but I am also a presenter and an actress too!

An Artist. I truly believe I was put on this earth to create stuff!

Edith Piaf. I want to chat about passion and perseverance.

You mentioned earlier that if you weren't a jazz musician you would be an artist. So my question to you is; If your music was a piece of art what would it be?

What a fantastic question! It would be something between one of Frida Kahlo's self-portraits and Rodin's sculpture "The Kiss." In fact, pass me a paint brush and chisel!