One of the most entertaining and engaging shows I have ever experienced ... Kate’s phenomenal charisma and encouragement of audience interaction created an electric atmosphere ... an exceptionally talented performer; the audience singing along, dancing and rewarding every song with rapturous appreciation ... such a superb talent ... She is certainly one to watch and an artist we hope to work with again in the near future.” - ARTHOUSE MUSIC

Eclectic British singer-songwriter Kate Thomas grew up in a small town in Essex called Laindon, near a place nicknamed 'Alcatraz'. Feeling trapped in her early years, Kate would immerse herself in music, maps and languages. The family home was, 'small with woodchip on the walls', but it was warm and creative and the family would spend their time playing music together. The soundtrack to Kate's childhood was mostly jazz, with the likes of Ella Fitzgerald, Billie Holiday and Frank Sinatra featuring prominently. Kate's grandad 'farvie' was also a well-known drummer in East London; playing regularly at Ronnie Scott's and at the Krays’ now notorious R&R club. Kate's early interest in languages continued unabated, leading her not only to sing Italian opera, on a chair, in a restaurant, in a place called 'Bas Vegas', but also to translate a love letter into Russian for a neighbour!

After university, Kate decided to discover the world she had studied for so long in books, travelling around Central Europe, Eastern Europe, through to Asia, Australia and New Zealand, with just a backpack and guitar in tow. When Kate returned, she trained as an Actor, after which she received two sizzling reviews in The Stage newspaper, one calling her a 'working class terror'. On leaving drama school however, this fair lady was continually led back to the stage, not to act but to sing. Kate has performed in many genres and languages over the years, including folk, gypsy, latin and jazz; taking her, among other places, to France, Glastonbury and following in her grandad's footsteps, Ronnie Scott's.

Kate's life was then hit by tragedy with the sudden loss of her brother, an up and coming singer- songwriter and multi-instrumentalist, in a tragic accident. Shaken by her brother’s untimely passing, Kate decided that life is too short to 'muck around' and did what she had always wanted to do, taking all the music that set her soul on fire to start writing her own. With her eclectic jazzy, gypsy, Latin sound, Kate is currently being described as a ‘Latin Amy Winehouse meets a Gypsy Kate Bush’.

Last year (2019) Kate was supported by Music Gateway to attend the MIDEM music conference in Cannes, France and excitingly MIDEM themselves will be supporting Kate to return this year (2020). Back in 2017 Kate was supported by PRS for Music and released her debut EP “The Lion's Raw” and this is what they have been saying about it:

“Sultry dame” - ALL ABOUT JAZZ “Where the energy of rock blends in with the intimacy of folk” - A&R FACTORY “Will make you want to watch Chocolat again.” - FREQUENCY 21 “Kate Thomas you certainly have a style of your own” - MEL WATSON, PHOENIX FM

Kate recently released her long awaited new contemporary jazz single “How Did I Get Back Here Again” with Howl from the Embers (10 January 2020) It is currently piquing the interest of various jazz radio stations and publications. It is available on all major platforms.

Read more articles
One of the most entertaining and engaging shows I have ever experienced ... Kate’s phenomenal charisma and encouragement of audience interaction created an electric atmosphere ... an exceptionally talented performer; the audience singing along, dancing and rewarding every song with rapturous appreciation ... such a superb talent ... She is certainly one to watch and an artist we hope to work with again in the near future.” - ARTHOUSE MUSIC

“A stunning 4-tracks of gypsy-folk that displays Latin to Jazz and acoustic influences for a result that will make you want to watch Chocolat again.” - FREQUENCY 21

“Kate Thomas you have certainly got a style of your own!” - MEL WATSON, PHOENIX FM

​”This time she's got a full band behind her and it sounded, for want of a better word, off the musical hook!” - JAZZY RON

“Kate's voice is like melting chocolate, with cream, then more chocolate” - BAD LAYDEE 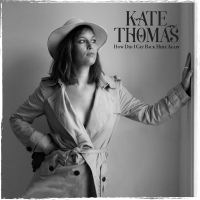 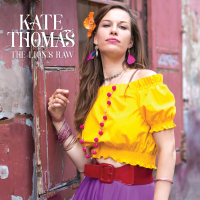 From: The Lion's Raw
By Kate Thomas

All About Jazz musician pages are maintained by musicians, publicists and trusted members like you. Interested? Tell us why you would like to improve the Kate Thomas musician page.