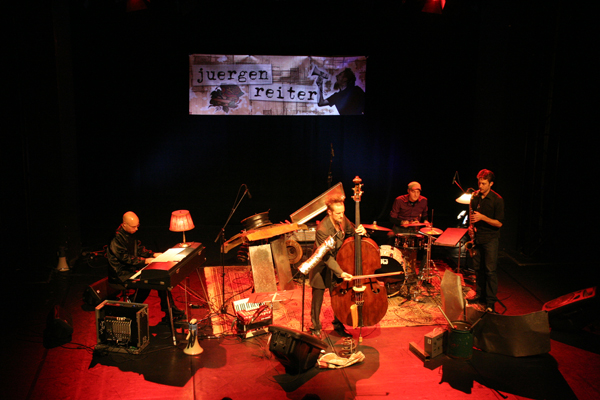 Juergen hit the local music scene of his hometown, Munich, at age 17. Shortly after his debut as a bassist he played in an opening act for Ray Charles. He honed his skills at the Sweelinck Conservatory of Amsterdam, in Paris under John Cage colleague Joelle Leandre, and, finally, at SUNY Purchase, New York. He graduated with a Masters degree in music in 2001.

2003 was a period of intense creative output. In that year, Juergen invited vocalist/laptop artist Hester Boverhuis of Amsterdam, and multi instrumentalist Kai Wolff of Berlin to join the fun. Together with Hester he wrote the audio-visual music and literature performance, Breakdown on Paradise Blvd—Showdown in Three Acts, which they performed in Munich at Laden 13. The show contains text fragments by William S. Burroughs, Hunter S. Thompson and the Brotheres Grimm. plus fragments taken from a conversation of David Bowie and Burroughs. It staged the exceptionally surreal circumstances of life in sound, word and picture.

Besides being an artist and composer, Juergen has, over the last couple of years, produced numerous soundscapes for Europe's biggest live TV event (15million viewers, average) Wetten, dass...?

He resides with his family in Munich, Sicily and New York.

I knew I wanted to be a musician when... I heard Kiss' Dressed to Kill for the first time. I know it's rock, not jazz, but it got me involved.

Your sound and approach to music: Music is not just a sound, it's a movement and the soundtrack to a listener's life. Every phase of my life has a specific soundtrack, music that dominated that phase and which resembles my state of mind/soul of that time. I could easily make a Juergen Reiter life soundtrack/music compilation.

Your teaching approach: Focus on your strengths to multiply them, eliminate everything responsible for not feeling well musically and in life, cut out the noise and focus on your art.

Your favorite recording in your discography and why? Music Of Ghouls is my favorite because it's the latest. I always like the newest album the best.

What do you think is the most important thing you are contributing musically? Trying to tell a story through the music rather than portraying myself.

CDs you are listening to now: Tiger Lillies makes my favorite soundtrack these days.

How would you describe the state of jazz today? spreading like a very cool and positive virus.

What are some of the essential requirements to keep jazz alive and growing? I think it is essential these days to communicate with the fans on a high level. Know your fans and treat them well and they won't let you down.

If I weren't a jazz musician, I would be a: Diva.