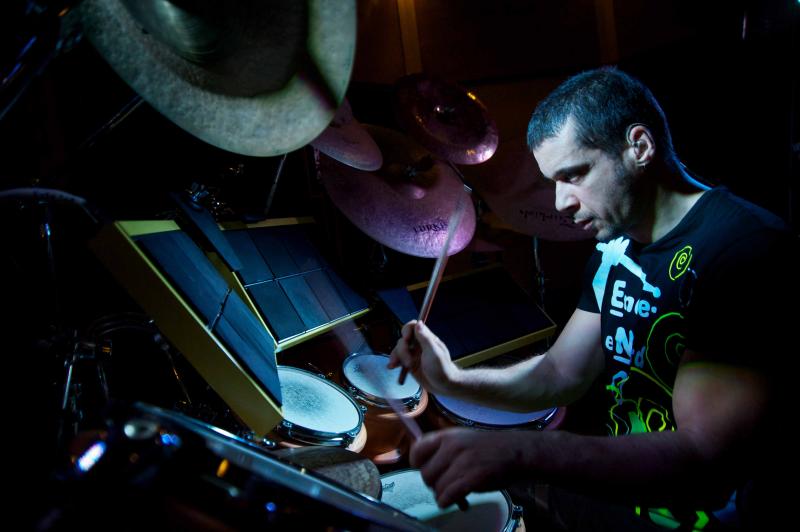 view slideshow
BY ENDRE HUSZAR
September 18, 2014
Sign in to view read count
Meet Endre Huszar:
"Versatility" is probably the word that would describe best Endre Huszár's career: beside being a musician/composer, he is also known as a journalist and media expert. While playing with many leading Hungarian acts in a wide range of genres from pop, alternative rock to jazz and world music, he formed his jazz fusion project, the 9:30 Collective in 1995. Meanwhile, he also contributed to other projects as a sound engineer and arranger and composed music for commercials, theater and various other applications.

In addition to his musical work, he was the operational director of 92.9 Sztar Radio, which was one of the most successful pioneers of Hungarian commercial broadcasting. He was senior columnist for Zenész Magazine for over 10 years. His musician interviews ("From Aerosmith to Zawinul," as he often refers to them) were regularly published in print media and were aired on various radio stations.

In 2012 he launched his technologically cutting-edge solo project, which is based on a unique drum system that enables him to build up complex improvised musical textures on the electronic drum pads while playing the acoustic kit. Their live debut (entitled The Time Capsule) was released on a 3D Blu-Ray.

I knew I wanted to be a musician when...
I composed my first piece at the age of 10.

Your sound and approach to music:
No matter how complex and advanced it is technologically or compositionally, music should never be art for art's sake and should always be driven by emotions and spirit.

Your teaching approach:
Make them play music that reflects our age instead of slavishly replicating what was created in the past.

Your favorite recording in your discography and why?
Endre-eNerd's The Time Capsule. It's a technologically cutting-edge and inventive performance, where all pieces have a strong message beyond music.

What do you think is the most important thing you are contributing musically?
Incorporating the latest technologies into improvised textures, take interaction with computers to a further level.

Did you know...
I have three dogs. One of them was born deaf and she can peacefully sleep in the studio even during the loudest recording sessions, even more, she loves to lie near the bass drum.

How would you describe the state of jazz today?
R.I.P.

What are some of the essential requirements to keep jazz alive and growing?
To get out of its self-built musical ghetto and be on the forefront of the newest developments in music instead of vaguely following them.

What is in the near future?
Find opportunities to perform with Endre-eNerd.

What's your greatest fear when you perform?
Technical failure of crucial equipment.

What song would you like played at your funeral?
Joe Zawinul's "Peace"

What is your favorite song to whistle or sing in the shower?
Avi Bortnick, Adam Deitch, Jesse Yusef Murphy, John Scofield: Thikhathali.

If I weren't a jazz musician, I would be a:
dog trainer.