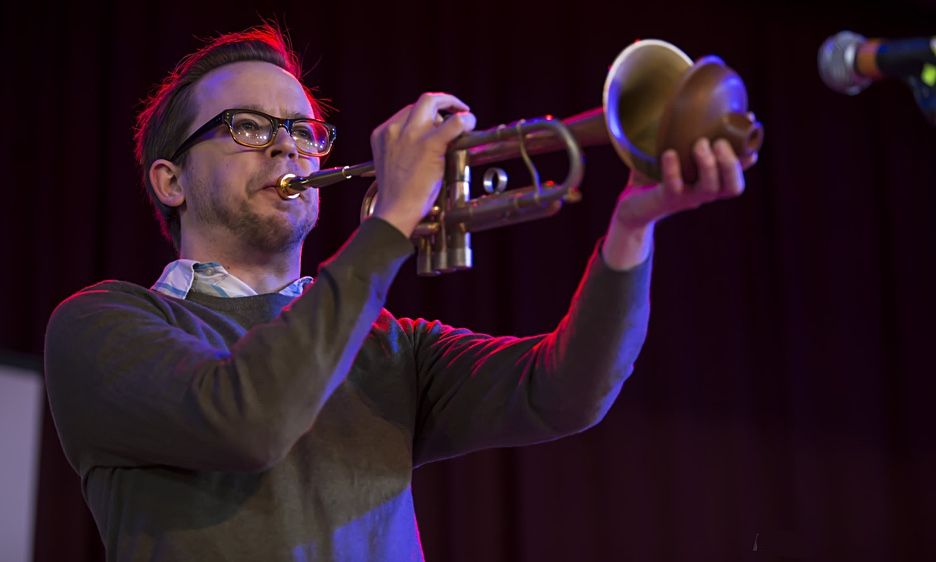 By Dave Chisholm
July 3, 2010
Sign in to view read count
Dave Chisholm is a trumpet player and composer who currently lives in Salt Lake City. He is moving to Rochester, NY in the fall of 2010 to pursue his DMA at the Eastman School of Music. He has his bachelor and masters degrees from the University of Utah.

Dave's first album, Radioactive, is coming out June of 2010 and features five of his new big band compositions. It is inspired largely by comic books. Dave is also a published comic-book writer and artist.

My influences are far-reaching. It would be insane to list all of the trumpet players that have influenced my playing in all sorts of ways. In a way, my biggest influences were the players who fostered my growth by hiring me to play music that was beyond my abilities. My current favorite players are Ambrose Akinmusire, Dave Douglas, Roy Hargrove, and Nicholas Payton.

My current favorite writer/composers in the jazz idiom are Maria Schneider and Darcy James Argue.

I started writing music. That was really the moment that music went from being sport to being a personal expression.

This is a tough question. My approach boils down to this: communication. My goal is usually to communicate a story or an abstract narrative, or to communicate musically in real-time with my colleagues. My sound is adaptable to whatever musical situation I am in, although I tend to prefer a darker trumpet sound!

I try to give my students the tools necessary to communicate whatever musical ideas they wish to communicate, whether it be bebop, modal, through-composed, post-rock, or whatever. In so many ways, it is a teacher's job to inspire his or her students, because playing music is such a personal quest.

Dave Holland on double-bass, Kaveh Rastegar on electric bass, Brian Blade and Dave Grohl on drums, Thom Yorke and Hacke Bjorksten on vocals, Johnny Greenwood on guitars and sounds, and Herbie Hancock circa 1967 on piano.

I got food poisoning before the last show of our tour and the band drove all night to get me home. By the time we were 90 minutes away, I had thrown up so much that the tips of my fingers went numb!

Well, I've only done one, and Radioactive turned out really well. I couldn't be happier with it.

The first one I heard was either Miles Davis' Kind of Blue or Sketches of Spain, or Charles Mingus' Let My Children Hear Music. The first one I bought with my own money was Wynton Marsalis' Blood on the Fields.

It is dangerous to look at it this way, I make music because I love making music. I write music that I feel and hear. That is what's important to me. It's not up to me to decide what kind of line my music is drawing in the sand.

I am also a published comic book artist and writer.

There is so much exciting and amazing music being made right now. I think it is great, although it would be even better if the public at large was more receptive to it. I'm OK with it being a little bit "fringe," though.

Musicians that are dedicated to playing and expanding this music and people that are hungry for it.

On June 29, I am putting on the New Improvised Music Festival in Salt Lake City, UT. It's going to be one night with eight bands playing. I really can't wait for this— the community of young jazz musicians playing in Salt Lake City is really strong right now.r>

After that, the University of Utah Jazz Ensemble is playing at the World Expo in China early in July. Then, I'm moving to Rochester, NY to begin work on my DMA at the Eastman School of Music. I am also playing a few shows in Toronto in early August.

Right now, I teach trumpet and also work at the University of Utah Hospital in the telecommunications department.