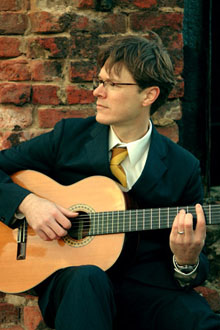 Meet Art Hodges: Art Hodges is an American guitarist, composer, arranger, and teacher currently residing near Tokyo, Japan. For over 25 years, he has studied, mastered, performed, and taught a variety of guitar styles and musical genres (including jazz, rock, blues, and classical).

At Virginia Commonwealth University's School of the Arts, he avidly studied both jazz and classical guitar disciplines, as well as composition and arranging. He was also a student of guitar guru Tim Reynolds, and attended master classes with world renown artists John Scofield, Jimmy Bruno, Manuel Barrueco, and Eliot Fisk, to name a few.

Since the early 90's, Art has been an eclectic voice in the central Virginia music scene. He has collaborated, performed and recorded with everything from jam bands to classical ensembles. Art may hold the unique distinction of being the only guitarist in history to both memorize the Bach Chaccone in D minor, and portray "Slash" in a Guns-N-Roses parody/tribute band.

For over a decade, Art has been teaching students of all ages and levels to play guitar and appreciate all genres of music. In 2008, Art bid a fond "Sayonara" to his friends, fans and students in Virginia and moved to Japan, where he recorded his debut solo guitar CD, entitled "Easy Living" (available at arthodges.com).

"Easy Living" is a collection of solo guitar arrangements of classic jazz standards. Art's arrangements are rich and polyphonic, often sounding more like solo piano (or guitar duet) than solo guitar. He plays "fingerstyle" (without a pick), in the tradition of jazz guitar greats like Joe Pass, Charlie Byrd, Lenny Breau, and Martin Taylor.

I've had a lot of great teachers over the years. Most notably, Tim Reynolds (Dave Matthews Band), who is such a natural musician that he's inspiring just to be around. Then I went to VCU and studied with Mike Ess, David Toussaint, Corey Blake, and John Patykula (who were all great teachers in their own way).

I knew I wanted to be a musician the first time I heard Elvis Presley sing "Hound Dog."

My sound is the sound of a guy with a guitar who loves music. My approach to music is: I play what I like and hope other people like it too. I play jazz on a classical guitar. I prefer playing finger-style, because it allows for more polyphony than pick-style. A good finger-style guitarist can play several independent lines or "voices" simultaneously. I went to music school and studied classical guitar and jazz guitar, and now I'm sort of combining the two. Learning some of the great classical guitar repertoire taught me the potential of the guitar as a solo instrument. I'm just trying to realize that potential in a different genre. It seems perfectly natural to me.

My approach to teaching varies depending on the student. I try to make it fun for the student, and focus on the music or style that they want to learn. You can always use their favorite song as a means to learning some chords or theory. Students can get chords, scales, and arpeggios anywhere, but what they really need from a teacher is inspiration and motivation. The last thing I ever want to do is cause a student to get frustrated or lose interest. It's inevitable that some students will (get frustrated or lose interest), I just don't want to be the cause of it.

My favorite recording so far was Easy Living. Easy Living is a collection of classic jazz standards arranged for solo guitar. What I like most about the recording is the pure acoustic sound I achieved by using a great sounding guitar, proper microphone placement, and minimal post-production. One listener commented that it was like having me right there in front of them, playing a private concert. That's the kind of intimate sound I was going for. My next project will be recorded in a similar way, but will feature the wonderful music of Luiz Bonfa and Antonio Carlos Jobim.

Honestly, I wish I could remember. It was probably some '70s fusion, maybe Weather Report or Return to Forever. When I started getting good at guitar, I went through a big fusion phase. I would go to all the used record stores and buy every fusion record I could find.

Simplicity. It's OK to just play the melody sometimes. I think less is usually more when it comes to composing and playing music. Complicated music may stimulate your cerebrum, but it won't give you goose bumps. Like when a great singer is pouring their heart and soul into every note of a simple melody. Too many musicians, especially guitarists, are more focused on impressing each other than playing great music. If musicians are only playing for each other, then (pretty soon) the fans will stop listening.

Wes Montgomery, Smokin' at the Half Note (Live) (Verve);

I think the market for jazz is actually growing in some places. Lately, there has been a popular trend toward acoustic instruments and old school recording techniques. As people become disillusioned with over-produced pop music, I think that will inevitably lead them back to classic recordings of jazz and blues. I hope so, anyway.

Jazz musicians should be more open-minded and accepting. We need to be collaborating with great musicians from other genres. I think a lot of people are intimidated by jazz music, like it's some kind of foreign language they can't speak. We need to debunk that idea. Jazz music is just music, and you don't need a degree to enjoy it.

My next project will be a Brazilian jazz guitar album, featuring the music of Jobim and Bonfa. The album will be available in late summer/early fall 2010 in several different formats. Transcriptions of all the tracks will be available separately or bundled with the music.