Home » Search Center » Results: Why Not?

Results for "Why Not?" 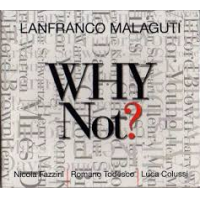 Label: Splasc(H) Records
Released: 2016
Track listing: The Days of Wine and Roses; Alone Together; There Will Never Be Another You; All the Things You Are; Solar; Stella by Starlight; Blues to Monica; Joy Spring.

Lanfranco Malaguti: Why Not?

Alto saxophonist Marion Brown came off playing with John Coltrane on Ascension (Impulse!, 1965) when he recorded two albums for ESP Disk. On the first, his eponymous 1966 release, the music was fiery and free-wheeling, underscoring Brown's presence as a potent improviser. His second, Why Not?, saw him take a more altruistic approach. He moved away ...

Marion Brown is often referred to as America's greatest unknown musician and this he very well is. His output has been small, but his wonderful alto horn can be heard on some of the finest records made--notably on Archie Shepp's Fire Music (Impulse, 1965) and with John Coltrane on Ascension (Impulse, 1965). And then there have ...