From an early age, Walter began taking music very seriously. “My first gig was playing at a McDonalds in Houston with another saxophone player. I took a solo on “Blue Bossa.” It was terrible. People clapped, and I figured if I could get away with that and get applause, how could I fail?”

Although it may appear Smith is a new voice on the scene, he is widely recognized as an adept performer, accomplished composer, and inspired educator. Smith’s latest release, In Common III, has been described as “boundary pushing”, and features some of the most important and talked about musicians in the world - Matt Stevens, Kris Davis, Dave Holland and Terri Lyne Carrington. 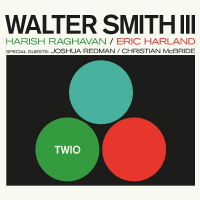 Label: Whirlwind Recordings
Released: 2018
Track listing: Ask Me Now; Nobody Else But Me; On The Trail; We'll Be Together Again; I'll Be Seeing You; Adam's Apple; The Peacocks; Social Call; Contrafact.

The awareness of an audience or home listener is a key rite of passage in the creative development of an artist. Its something that usually becomes an issue as a performer moves beyond that initial creative surge of their early work, that build-up of compositions that led to initial success and attention has been exhausted and ...

The unashamedly retro cover art of Twio accurately signposts the content of this imaginative album's track selection of jazz classics and standards. The only exception to this programme is Walter Smith III's original composition “Contrafact," chordally based on “Like Someone In Love" but given a 5/4 makeover. This involves the twin tenors of Smith and guest ...