Born 1981 in Israel, Tomer Baruch began playing the piano at the age of 6, and has composed short pieces of music since early childhood. At the age of 16 he began studying Jazz with John Bostock and Albert Beger. In 2004 Baruch entered the Jerusalem Music Academy, and studied piano with Dr. Zeharia Plavin and Vychaslav Ganelin. In 2005 Baruch re-established, along with Adam Cohen, Ziv Teller and Tal Gur, the band “a caravan shall run” which performed a fusion of Jazz, Rock, Electronic music, Ethnic and Israeli music, and combined all that with a lot of free improvisation. The band was active until 2007 and gained reputation, mostly in Jerusalem. In 2008 Baruch Graduated the music academy with honors Tomer Baruch Quintet: The Nature Of Not Knowing 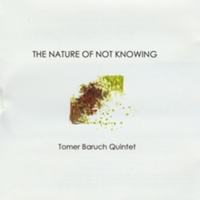 Tomer Baruch Quintet: The Nature Of Not Knowing

The Nature Of Not Knowing