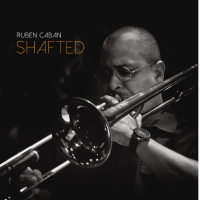 Puerto Rican trombonist Ruben Caban makes a splash with the Latin jazz shaded Shafted, his first own-name album. The disc is full of grit and swagger and offers a host of original compositions sure to shake them bones. A professor of jazz trombone at Florida International University as well as Miami-Dade and Broward colleges, Caban is ...

Label: Ruben Caban Music
Released: 2018
Track listing: Invitation; Shafts of Sarcasm; E.T. ; Vozaconfusion; What About You and Me; That One Tune; Struttin' To A Groove; Hope Street.