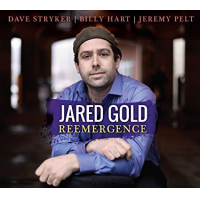 Label: Strikezone Records
Released: 2018
Track listing: Reemergence; It Ain't Necessarily So; Lookin' For Another Pure Love; She's Leaving Home; One for John A; How Long Has This Been Going On; Blues Connotation; Sweet Sweet Spirit; Nomad.

The title of organist Jared Gold's newest release seems to suggest that he is returning to the fold after being away for a time. In actuality, he has been a mainstay on the New York scene for some time now and can boast eight previous albums as a leader dating back to 2008's Solids ...

Trumpeter Eddie Henderson has recorded more consistently throughout the 1990s (for Steeplechase and Milestone) than he did during the previous decade, so this really isn't a “reemergence" at all. It is, however, among one of his finest albums since what remains his very best - his first two kosimgroovy solo albums, cut for Capricorn in 1973 ...

Considering that he's approaching his 60th birthday, you'd think that trumpeter Eddie Henderson would be better known than what he is. But of course we also have to take into consideration that there are actually two Eddies- the jazz musician and Dr. Henderson the practicing psychiatrist. Yet despite his dual activities and the limitations of a ...

Eddie Henderson is one of those immoderately talented but relatively unsung players who are known as “musicians’ musicians,” mainly because the public at large has almost no idea who they are or what they are capable of doing — which in Henderson’s case is almost anything he pleases, at least on trumpet. The 58–year–old veteran was ...