Born in ’57, he is an eclectic and much talented guitarist graduated in Classical Guitar and with an academic degree in both Jazz and Biology. He has been nicknamed “A Six strings orchestra” for his unique ability in using harmonization. During his long career he developed a deep tone color method, exploring different musical languages between jazz, bossa-nova, contemporary, Mediterranean music and Bach's counterpoint technique. ARTISTIC CURRICULUM He played in many Jazz festivals both national (Bordighera JAzz an Blues, Pino Jazz Fest, Ivrea Euro Jazz festival, Heineken Winter tour...) and international (Grenoble Jazz Festival, Annecy Jazz Festival, Praga Jazz Festival) including the latest Moncalieri Jazz Festival 2008 where he won the “Incroci Sonori” prize, and many editions of the Festival Antidogma (he also participated to the first worldwide performance of Steve Reich’s “Electric Counterpoint”). He played as well in many national and international Classic and Contemporary Music Festivals such as Antique and Contemporary International Music Festival, Festival delle Rocche, Piemonte in Musica, Contrappunti/3, Spartito & Musica, Vox Organalis, Jazz Meditation and many others. He played with important artists such as: Enrico Rava, Barney Kessel, Tal Farlow, Bill Cobham, Franco Cerri, Ornella Vanoni, Tullio De Piscopo, Gianni Basso, Flavio Boltro, Dino Contenti and many others. He worked in major orchestras (Rai Orchestra -M° Pinuccio Pirazzoli, Canale 5 Orchestra -M°Augusto Martelli, Gipo Farassino's Orchestra,Turin’s Philharmonic Orchestra…). He worked with the Teatro Regio of Turin playing mandolin in Prokofiev’s “Romeo e Juliet”, playing guitar in Donizzetti’s “Don Pasquale” and in Massenet ‘s “Don Chisciotte”. On records he played as guitarist, composer, arranger and performer in many projects 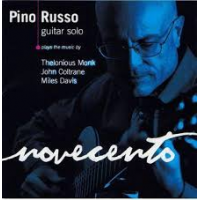