A native of New York City, Nick Moran began playing trumpet at age ten, switching over to the guitar at thirteen. His early musical influences were the British rock guitarists Jeff Beck, Jimmy Page and Peter Frampton. Moran played in several rock groups throughout high school and college, and also studied classical guitar. He first discovered the music of George Benson at age fifteen. Other musical influences include Jim Hall, Wes Montgomery, Miles Davis, Dexter Gordon and Art Blakey’s Jazz Messengers. Nick’s study of jazz began in 1991 with arranging and ear training classes at the Fachbereich Musik in Mainz, Germany, where he also played guitar and trumpet in the university big band

Elegy for an Undiscovered Species

Supported by the Artemis supergroup members drummer Allison Miller and trumpeter Ingrid Jensen as well as by long-time collaborator Dayna Stephens and bassist Nick Moran, Johannes Wallmann can count himself lucky to have a celebrity packed core band behind him to present six new cuts fresh off the pianist's pen. In addition to the celebrity lineup, ... 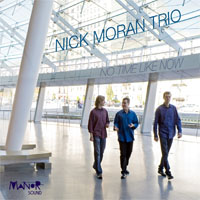 With every well-placed note and every incisive solo on Nick Moran's new album No Time Like Now, the guitarist brings an urgent creative agenda to the table. Featuring organist Brad Whiteley and drummer Chris Benham, both rising players on the New York scene, No Time Like Now is a potent trio session that focuses on Moran's ...

Part of the appeal of the traditional organ trio--Hammond B3 organ, guitar and drums--is the juxtaposition of the guitar's succinct phrasing slicing through the blurry winter breeze of the B3. Another part is the music's straight-up funkiness. This is music of the city, pioneered by organist Jimmy Smith and guitarists Wes Montgomery and Grant Green. The ...

Rockwired.Com's 'All New Jazzed and Blue Features The Nick Moran Trio and Their Latest Release "No Time Like Now"

The weekly online radio series Jazzed and Blue: Profiles in Blues and Jazz is back and is now available for download at Rockwired.com and features an exclusive interview with jazz guitarist Nick Moran of The Nick Moran Trio regarding his brand new release No Time Like Now. In the opening segment, Moran discusses the inspiration behind ...