Results for "Next In Line!" 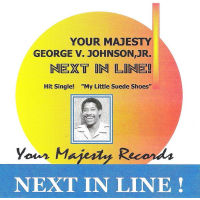 A student of the late Eddie Jefferson, Washington, D.C.-based vocalist George V. Johnson takes his cue from Jefferson's later (1970's) sound with a repertoire drawn largely from the contemporaneous Miles Davis book. The versatile Johnson whose resume includes acting, teaching, and producing wrote lyrics (mainly vocalese) for five of the tunes. “Freedom Jazz Dance," the most ...

George V. Johnson Jr is a talented young jazz vocalist that specializes in a brand of jazz singing popularized most notably by Jon Hendricks and Eddie Jefferson called vocalese. In fact, the title of this CD, Next in Line brings to bear the very words uttered by Eddie Jefferson (heard in the opening seconds of the ...