Let’s hear it for the boys! More than 25 years after Melissa Manchester released Tribute, her 1989 album that honored the great female singers who influenced her, she turns the tables with The Fellas, a radiant encomium to the men, including Frank Sinatra, Mel Tormé, Tony Bennett and Dean Martin, and the iconic songs they made famous. Singing with a verve and emotional vulnerability that immediately captivates, the Grammy winner inventively reimagines these be-loved standards. She turns “Chances Are” into a sly bossa nova and scats with seemingly impossible ease on “Love Is Just Around The Corner,” while bringing an understated urgency to “Night and Day.” Many of these tunes embedded themselves into Manchester’s musical DNA while she was growing up on New York City’s Up-per West Side

I Gotta Swing - Celebrating Blanche Calloway and Her Joy Boys

A lot of great things have happened in John Proulx’s life. He recorded three albums on the MAXJAZZ label, played with some amazing musicians and toured extensively, making many friends and fans across the country. But after the owner of MAXJAZZ passed away and the catalogue was sold to Mack Avenue Records, Proulx decided it was ...

Shawnn Monteiro: To Carmen with Love 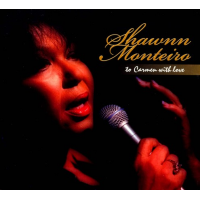 Tributes to legendary jazz greats of the past dot the landscape of today's music, but few can actually boast a direct connection to the artist of homage. Singer Shawnn Monteiro--long influenced by the beautiful voice of pianist and vocalist Carmen McRae--is an exception. Her father and godfather, bassist Jimmy Woode and trumpeter Clark Terry, respectively, both ...

If My Heart Had Wings