Mark Moultrup is a keyboardist, vocalist, composer, arranger, and educator originally from Detroit and after living in Chicago, now resides in St Petersburg, FL. His 6 CD releases have been heard on NPR and were reviewed by Jazz Times, All About Jazz, Chicago Jazz Magazine, and many others. He produces his own CDs and has written arrangements for a variety of ensembles from trio to big band, and vocal. He has been active in schools, teaching, arranging, conducting music clinics and performing. Mark has been a full-time working musician for 40 years. Venues include work in jazz clubs, festivals, musical theater, concert stages, churches, studios, dance clubs, private and corporate functions, and has performed throughout the United States, as well as Europe, South and Central America, and the Caribbean. He has performed at the Detroit International Jazz Festival 11 times, including 4 appearances with his own group. Chicago performance venues include The Green Mill, Andy’s Jazz Club, Taste of Chicago, The Chicago Jazz Festival, The Jazz Showcase, The Art Institute of Chicago, Sullivan's, Fitzgerald's, The Black Ensemble Theater, Eddie V's. In Florida Mr Moultrup was featured soloist for La La Land in Concert with a 60 piece orchestra at the Dr Phillips Center for the Performing Arts in Orlando, and at the Mahaffey Theater in St 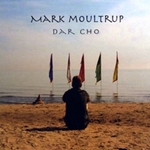 Label: Self Produced
Released: 2009
Track listing: When Then Was Now; Corcovado; What About; Ted's Last Song; Good Will in the Wind; Avant Garlic; Waltz; Of a Dream; It Has Always Been You; Burger in the Bush; Come Fly With Me; Summer Wind; I Know It's Only Be Bop.

Chicago pianist Mark Moultrup embraces the Tibetan spiritual call for spreading good will and compassion to all known as Dar Cho, the Tibetan word for “prayerflag," and dedicates this new musical project to the same cause. An innovative composer and vocalist, Moultrup fashions a cleaver session of modern and mainstream jazz through a landscape of ten ...