All-Female Bands Are a Riot!

As much as we favor a complete integration of the jazz sexes, this week we feature twenty-four bands or projects with not a single man in sight, actually in hearing. After all, how much jazz radio have you listened to (not on Mondo Jazz) with playlists made exclusively of all male bands? Here's a small contribution ...

The Minimalism of Erik Satie

A Notion in Perpetual Motion 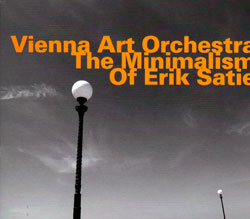 This is starting to look like the year of Erik Satie. How else could there be two magnificent albums dedicated to his music? The first was Dan Willis and Velvet Gentlemen's The Satie Project (Daywood Drive Records, 2010), while this rerelease of 1984's classic, The Minimalism of Erik Satie, features Mathias R&#252egg's large ensemble tribute to ...