Jazz guitarist Larry Tamanini has been a stalwart of the Philadelphia Jazz scene since the late 1990s. In that time Larry has developed an unique tone and voice on the guitar that has made him one of the most respected and sought after guitarists in the area.

Larry was born into a family that loved and valued great music and it was this support system at home that encouraged him to pick up the guitar and follow his own love of music.

In among the more usual full-length offerings (arguably one ideal standard for collections of music), it's also good not to overlook the appeal of servings in smaller sizes... Larry Tamanini Front & Center Outer Marker2020 Somewhere at the intersection of urbane contemporary and old-time retro lies a sweet spot ...

jny: Philadelphia leaves such deep and wide fingerprints on guitarist Larry Tamanini's Front and Center that he could list the city in its credits. Tamanini emerged on the Philadelphia jazz scene in the late 1990s, studying privately under Philly jazz guitar legends Dennis Sandole and Pat Martino, whose cerebral yet soulful sound sometimes echoes ...

Front & Center is an exciting EP from jazz guitarist Larry Tamanini and is the second album Larry has released as a leader. On this second album is was important for him to showcase his compositional skills as well as his talents as an improviser.

All of the six songs on this album were written by Larry and feature his unique and personal songwriting style, ranging from the high energy opening title track "Front & Center" to the melodic odd meter excursion "Five Minds" and the super soulful earthy picking on "In The Night" which evokes a classic Blue Note feel while still sounding current and fresh.

Throughout this album, Larry had the great fortune to be accompanied by a stellar lineup of musicians including George Hazelrigg on piano with impeccable timing and taste coupled with some powerful soloing and responsive comping. Geoff Hazelrigg on bass holding down the low end with authority and defining the group sound with spirited interplay with all soloists as well as some poignant moments out front. West Coast import John O'Reilly Jr completes the quartet with his remarkable dynamics John is the catalyst for so much of the music and spontaneity that happens on this album.

A thoroughly well played and recorded album Front & Center is a must-listen statement from Larry and for any fan of hi-resolution sounding creative music and definitely changes the game for how any guitar plus an acoustic rhythm trio can sound and be produced.
21
Track of the Day

Meet Rhenda Fearrington: Rhenda Fearrington is considered New York Soul in the Heart of Philly Jazz, which produces a warm and soulful presentation when singing from the Great American Songbook. When she's performing her original music, her authentic delivery is so engaging that even the largest venue becomes as intimate as her living room and ...

Topics of Conversation is the debut album from bassist and composer Tim Wolfe, Jr. The album is a nod to the great tradition of East coast hard-bop and features Wolfe’s original compositions. The band on the album is comprised of first-call talent in the jny: Philadelphia area: guitarist Larry Tamanini (who lends an original composition to ...

The Jazz Bridge second Wednesdays, Neighborhood Concerts Series at the Lutheran Church of the Holy Communion 2110 Chestnut Street in Center City Philadelphia presents guitarist Larry Tamanini on Wednesday, November 13th. Showtime is 7:30 p.m., tickets are $10/$5 for students, and are only available at the door. For info: 215-517-8337 or visit Jazz Bridge. The one ... 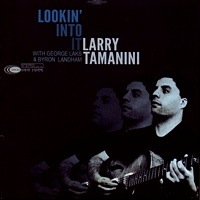