BY GENO THACKARA
April 2, 2020
Sign in to view read count
In among the more usual full-length offerings (arguably one ideal standard for collections of music), it's also good not to overlook the appeal of servings in smaller sizes...

Somewhere at the intersection of urbane contemporary and old-time retro lies a sweet spot where the feel of jazzy cool becomes timeless. Larry Tamanini happily walks that line through this delightful short trip, gliding over the fretboard with a versatility covering the whole spectrum of jazz guitar from Wes Montgomery to key mentor Pat Martino. Packing a lot of variety with a sense of fun, Front and Center is the kind of session that could have come from the present day, the '60s or anywhere in between.

Both Tamanini and his mates here are well-steeped in the tradition, having logged their quota of hours on the bandstand, and that slick camaraderie is evident through the rousing half-dozen tracks here. "Five Minds" fits its title with a telepathy that makes its odd signature sound as natural as any Dave Brubeck combo could make it. The almost-folky "Trust the Process" floats and charms with deceptive ease, while the slinky-rollicking "Tempest" is a particular showcase for George Hazelrigg as his piano weaves around Tamanini's light-toned lines. Vibrant swing or wee-hours blues, Tamanini's fleet guitar and the crew's sharp-cooking performance should delight jazz cats of just about any taste. 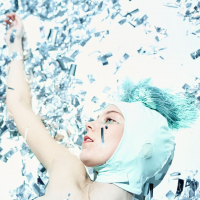 Kristoffer Rosing-Schow is certainly a fellow who wears many hats: composer for film and theater, painter, saxophonist and occasional developer of new odd instruments. For someone with such a fascinating CV, a detour into dark indietronica turns out to be not at all surprising. In a sharp departure from his previous endeavor No Hay Banda (self produced, 2018) with his Counterfictionals sextet, this EP is a slow drift through the psyche that gets downright spooky.

The short and determinedly not-sweet Loveu2nd drifts in an electronic haze of buzzsaw synths and vast atmospheres that intrigue and unsettle. Its organic roots are always there; the chords and melodies take surprising turns too intuitive to be calculated, while violin, viola and cello help add to the aural depth. Nonetheless a minor electronic chill coats the affair, and Clair Mutebi's voice, electronically processed to a weird state of androgyny, keeps everything just a little otherworldly. From the bleak fatalism of "Please" to the perversely cozy cloudscape behind "Not Important," Rosing-Schow weaves an immersive experience equally haunting and mesmerizing. The lyrical themes may suggest giving up on the world, but the music hints that there's enough strange beauty out there that we can never stop discovering more. 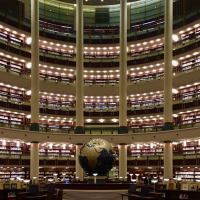 Sound-sculpting keyboardist Richard Barbieri has apparently had some time to take stock and clean house since the exceptional Planets + Persona (Kscope, 2017). A series of five fascinating ambient/electronic EPs under the name Variants found him trawling through the personal archives, dusting off almost-lost gems alongside current live tracks and new pieces that didn't have a particular home. Past Imperfect -Future Tense acts as something of a summary of its moment: it hints at the range of those previous compilations and there's a more defining full-length in progress, and in the meantime we get a glimpse of the twists and turns these ideas go through while in development.

Perhaps deliberately, the EP opens with a piece in consideration for P+P's eventual followup. "Flare" comes across like moody cool jazz for a far-space colony, ethereal trumpet floating over meandering semi-jagged piano before things drift into light dance and then fourth-world chill-ambient. The remainder includes more odds-and-sods gems: presenting a lo-fi live take on an old piece first developed with longtime collaborator Steve Jensen, then closing with a live medley leading from patient ambience to steady-building choir of ethereal looped voices. However piercingly apt the title may be, nothing makes any present easier to handle than such fascinating music to enrich it.

Tracks: Front and Center; 5 Minds; In the Night; Tempest; Trust the Process; The Determinator.