The Counterfictionals: No Hay Banda

By GENO THACKARA
February 10, 2019
Sign in to view read count 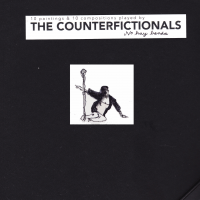 Considering the meaning of "No hay banda"—"there is no band"—you can immediately expect some humor and irony from Kristoffer Rosing-Schow and his motley friends (who certainly are a band, and a beguiling one at that). If you also recognize the phrase from the Club Silencio scene in David Lynch's movie Mulholland Drive, it won't be a surprise that the leader is a cinema fanatic attracted to the weird and wacky. The resulting album is a fascinating experience worthy of its namesake: it can be alluring and inscrutable, heartwarming or simply bizarre, and always one of a kind.

Each piece similarly takes inspiration from a visual source and brings it to life in a wonderfully skewed and vivid way. The opening homage to Lynch samples Rebekah Del Rio's performance from that iconic scene (a haunted reading of Roy Orbison's "Crying"), then weaves it into a dreary tango at the pace of a dirge. Lest that seem to be establishing too much of a tone for the album, "Lee Van Cleef" immediately turns on a dime: suddenly it's a sassy bit of club noir by way of spaghetti westerns, complete with raunchy saxophone and the semi-silly twang of a jaw harp. Like the films and shows they pay homage to, these songs present a spectrum of tones, as inseparably jumbled as they are in real life.

The Counterfictionals sextet serves as a versatile small combo at the heart of the affair, with their sounds changing as often as the moods: a little timeless swing here, some evocative chamber strings there; classy trumpet or baritone clarinet for one song, spooky electric guitars on the next. Rosing-Schow even went to the trouble of inventing a new instrument called the "hydrofonium"—a variation on the glass harp, with a set of singing water glasses that lets the player adjust pitch while circling the rims. The same care goes into the well-crafted artwork package, which superbly complements the music with a series of track annotations and quirky drawings.

No Hay Banda does not shy away from the darker corners of the imagination—after all, it really can't when honoring the likes of Paul Thomas Anderson and Terry Gilliam. Nonetheless the album manages to find compelling counter-shades to balance out any gloom. "Looking for Johnny Favourite" may evoke a pair of detectives heading for a heap of trouble, but the ride comes out as a sunny jaunt. "The Three Beggars" is patterned after Antichrist, which Rosing-Schow calls "perhaps the darkest movie ever made" in the liner notes. Yet when Katrine Krog Russo steps in on the album's only lead vocal, she turns the bouncing black-humor motif into its catchiest moment.

Amid such moody fare, the band is even happy to pay homage to a composer of children's television scores to make a genuinely sweet highlight in the early stretch. Somehow none of it sounds out of place: when nothing truly belongs, then everything belongs. The same goes for the group itself, which is happily supportive and always game to enjoy this surreal trip together. There's no telling how long a listener can spend down this rabbit hole and seemingly no shortage of further tunnels wherever you turn.