Killick Hinds is an improvising guitarist, composer, and writer living in Athens, Georgia. He plays a variety of unusual stringed instruments with a comprehensive approach to genres known and as-yet-unlabeled. Reinvention has been the constant throughout his creative output. He has toured extensively as a solo performer, and is an active organizer and promoter of lesser-heard music. He founded record label Solponticello in 2001, and now runs H(i)nds(i)ght for his musical and written word pursuits. Pop-culture mashups and ancient and obscure forms infuse his music; his song titles are integral to the works they embody: they result from free association without censorship, refined until they capture the tenor of a given piece of music…even if the reference remains elusive. Killick has deeply rooted classical technique as a player, but broadens the possibilities in his music by stretching and contracting phrases temporally, conceptually, dynamically, and stylistically 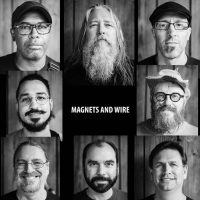 Label: Self Produced
Released: 2019
Track listing: Always check the guitar case for goodies; Cast an appropriate spell to make the noise go away; Heavy metal mudbomb; The more we search the less likely we are to find; Next best thing to incomprehensible; This is why I prefer cats; Are you weird?.