Debut Records came into being in April 1952, and soon was boasting many new artists in its rapidly growing catalog. In March 1955, the label's producers, Charles Mingus and Max Roach, were the first to recognize the talents of a 25-year old pianist from Philadelphia with an adventurous and creative mind, and a magician's touch: John Dennis. He put these qualities to good use in the recording session for the Thad Jones / Charles Mingus album Jazz Collaborations. As a result, Mingus and Roach decided to record the same day another album with him as a leader, with a title hinting at the producers' belief in him: New Piano Expressions. This event marked the arrival of John Dennis: his daring and advanced ideas left the entire jazz scene in awe and intrigue. In an interview with vibraphonist Walt Dickerson about Dennis, he mentioned, “His parents were fundamentalists who put a lot of pressure on him not to play the devil's music… it has a physical effect when an artist cannot continue to search and develop his artistry, something happens to that person both physically and mentally… I learned that many people die from a broken heart, nothing wrong with them physically, they're broken-hearted and just give up… and that's what happened to John…” After listening to these recordings, we can only imagine how far he could have come if his career hadn't been interrupted so suddenly 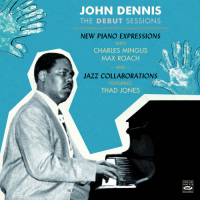 Pianist John Dennis recorded only two albums, both for Debut Records on March 10, 1955. The first album was New Piano Expressions, featuring John Dennis (p), Charles Mingus (b) and Max Roach (d) with solo tracks by Dennis. The second album was Jazz Collaborations, with trumpeter Thad Jones added to the trio. Debut was launched by ...