Among Jim's recordings are Mike Boone's "Better Late Than Never", Tyrone Brown's "The Magic Within" and "Bass Works", Barry Sames' "Celebration" and a sound track for a documentary film "Strokes of Genius" that was composed by Dr

Jim HoltonTemple UniversityPhiladelphia, PAMarch 7, 2013It's not often that one would want to cover a senior recital, but the rules change when the senior music student is fifty-two year old Philadelphia piano great Jim Holton. Holton took a thirty-year break from his studies at Temple University's famed jazz program to play ...

To celebrate National Jazz Appreciation Month and to strengthen City Hall's role as a cultural center, the city of Philadelphia's Office of Arts, Culture and the Creative Economy will present Jazz Bridge on Wednesday, April 11th from 5:30-6:30 p.m as part of the City Hall Presents! initiative. Appearing will be saxophonist Umar Raheem, pianist Jim Holton, ...

Stan Kenton Orchestra / DePaul University Jazz EnsembleDouble Feature, Vol. 1Tantara Productions2010 Some of us are old enough to remember double features, but they were in movie theatres, not concert halls or recording studios, and, as memory serves, were never quite as enchanting or memorable as this ... 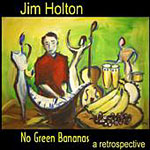 Listening to Jim Holton's CD No Green Bananas, there is a sense that he is not only a good musician, but a good person. This is a very personal CD for Holton, who dedicates the work to God and seems to include all of the people in his life that have paved the way for him ...