Jamie Pregnell is a Guitarist, Composer based in Hobart, Tasmania, Australia. Born in Tasmania, Jamie majored in Jazz performance at the University of Tasmania’s Conservatorium of Music. Upon completion of his Bachelor degree in 2012, he was accepted into the Banff International Workshop in Jazz & Creative Music in Canada. In 2016, Jamie completed an Honours degree at the UTAS Conservatorium focusing on the playing style and approach of Australian jazz guitarist James Muller. In this following year, Jamie was a recipient of an Australia Council personal development grant to undergo a 12 month mentorship in jazz guitar with James Muller. Jamie has just recorded an album of original compositions at Headgap studios in Preston, Victoria that features an all-star lineup including Julien Wilson, Sam Anning, and Ben Vanderwal. Recorded in January 2020, the album entitled “Sleepy Town” is to be released July 2020

Australian jazz guitarist Jamie Pregnell leads a quartet through a program of original compositions. Joined by tenor saxophonist Julien Wilson, bassist Sam Anning and drummer Ben Vanderwal, Pregnell kicks the album off with the gentle loping swing of “Brightside." The title tune is a lovely ballad—introspective, maybe, but certainly not sleepy. It inspires lyrical solos from ... 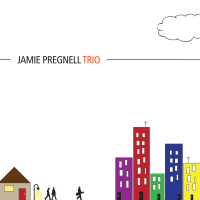