Results for "I'm All Smiles"

At a time when jazz is being pulled in every direction at once in search of a future some fear may not exist, musicians such as George Cables, Essiet Essiet and Victor Lewis are proving that, for those who listen, there is no place quite like the present. Essiet became the trio's bassist for its 2012 ...

George Cables, whose elegant piano has graced the jazz scene in New York City and elsewhere for more than five decades, has every reason to be All Smiles; at age seventy-four he is back at the keyboard, as sharp and inspired as ever, following surgery for ulcers that removed one leg above the knee. To mark ... 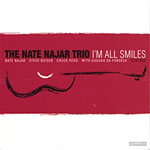 Label: Blue Line Music
Released: 2009
Track listing: I'm All Smiles; Remembering Charlie Byrd; What Are You Doing the Rest of Your Life?; Nate's Blues; Samba Do Aviao; Spring Can Really Hang You Up the Most; Swing '05; House of the Rising Sun; I Cover the Waterfront; Inutil Passagiem.

Nylon-string guitarist Nate Najar channels the creative and energetic spirit of the late, great guitarist Charlie Byrd on I'm All Smiles. The album features Najar alongside Steve Boisen on bass, Chuck Redd on drums and Duduka Da Fonseca on percussion. While Najar gives ample evidence of his advanced solo guitar ability, those moments are always carefully ...